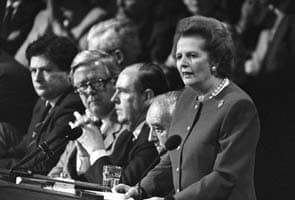 At some point in her 11-year rule, Margaret Thatcher adopted the royal prerogative of referring to herself in the plural - as when she announced the birth of a child to her daughter Carol in 1989.

"We have become a grandmother," she declared archly, suggesting to those Britons who resented her hectoring style that their first woman prime minister may be on the verge of usurping the Queen of England.

So when Thatcher abruptly fell from power in a few tense weeks at the end of 1990, it had all the drama of a Shakespearean tragedy. Reporters watched in stunned surprise as a historic, transformational leader was toppled by hubris and a fierce political attack by a once-loyal courtier.

The action unfolded in three scenes - the historic House of Commons chamber in Britain's parliament, a cobbled courtyard in Paris and Thatcher's prime ministerial offices in London.

Only months before her exit from Downing Street, Thatcher was riding high, confident of election to a record fourth successive term. Her reforms had transformed the creaking British social structure and she stood tall as a world figure who had helped win the Cold War.

Despite political setbacks that left her trailing in some opinion polls, she was already thinking beyond the next election. "There was still much that I wanted to do," she said in her autobiography "The Downing Street Years".

Then in late October 1990 the issue of European integration, which Thatcher fiercely opposed but many in her party supported, blew up in her face, triggering a sequence of events that allowed two fellow Conservatives to bring her down.

Sir Geoffrey Howe, her mild-mannered, owlish former minister for finance and foreign affairs who believed deeply in European unity, was finally provoked to revolt by her dismissive rejection of integration at an EU summit in Rome.

Michael Heseltine, a self-made multimillionaire who had long dreamed of the highest office, challenged her for the party leadership in a poll set that November, finally showing his hand after, as Thatcher said, "lurking in the wings".

SCENE ONE: A PACKED HOUSE OF COMMONS

As she said in her autobiography, in a chapter she pointedly titled "Men in Lifeboats", the critical blow came from Howe, then deputy prime minister, in his resignation speech to parliament on November 13.

For those of us listening in the press gallery in the packed House, the only sound apart from the portly Howe's measured speech came from intakes of breath by members amazed by the attack after his decades of deference to the steely Thatcher.

The speech was couched in courteous terms - even with some cricket analogies. But its barbed thrusts condemning Thatcher's refusal to budge on Europe sliced down on her as she sat grimly on the front bench. "Underneath the mask of composure, my emotions were turbulent," she said.

Howe concluded: "The time has come for others to consider their own response to the tragic conflict of loyalties with which I have myself wrestled for perhaps too long."

No one present doubted that Thatcher was in trouble.

Two days after that speech, which Thatcher described as "an act of bile and treachery", Heseltine challenged her for the Conservative leadership. By the time the party voted a week later, many did indeed reconsider their own loyalty to her.

Thatcher later conceded that she was overconfident and did not work hard enough to shore up her support. When the vote was held on Tuesday, November 20, she was at a summit of big powers in Paris called to set a new world order after the Cold War.

Thatcher and close aides including her private secretary, Peter Morrison, sat in a room under the roof of the British ambassador's residence on the exclusive Rue du Faubourg Saint-Honore awaiting the result to be telephoned from London.

"There was a brief silence after Morrison got the numbers," Bernard Ingham, Thatcher's veteran spokesman, told me later. But it was instantly clear: she had failed to win outright on the first ballot, putting her control of the party in jeopardy.

Thatcher and her entourage hurried down the stairs and burst out into a small, cobbled courtyard, pushing a BBC correspondent away from a live microphone to address a knot of reporters as we waited for her response.

She said she was disappointed not to have had the votes to clinch victory under the complex party rules but would go on to the second round of voting. On returning to London on Wednesday, November 21, she declared: "I fight on; I fight to win."

SCENE THREE: THE PALACE OF WESTMINSTER

Within hours, it was clear that the absolute control Thatcher had exercised over her Cabinet colleagues for more than a decade had cracked.

Even before she met with top party figures, her husband Denis, who always walked a few paces behind her in public but was the most influential person in her life, was privately dubious. "Don't go on, love," she recalled him saying.

For 12 hours that day, Thatcher had one-on-one meetings with top Tories in her secluded office tucked away in the sprawling neo-gothic parliament on the north bank of the Thames as she tried to gauge her support in a runoff with Heseltine.

A few expressed total support and said she would still win. But as the hours went by, marked by the doleful peels of the heavy bell in the tower of Big Ben, her prospects became more and more gloomy.

The oft-repeated refrain from party elders was: "Of course I will back you but I do not believe you will win". The unsaid message was that the party did not believe it could win the next general election with Thatcher as its leader.

She was bitter. In her memoir, she described one colleague as "deserting at the first whiff of grapeshot".

After a typical short night of sleep, she informed her staff at 7:30 a.m. on Thursday, November 22 that she was resigning. She held her last Cabinet meeting and went to Buckingham Palace to inform Queen Elizabeth.

Promoted
Listen to the latest songs, only on JioSaavn.com
Many years later, Howe summed up Thatcher's fate in his own ironic, bookish style: "The insistence on the undivided sovereignty of her own opinion dressed up as the nation's sovereignty was her own undoing".