Man Told Starbucks Worker His Name Was Aziz. She Wrote "ISIS" On His Cup

The employee wrote his name as "ISIS" - the acronym for the Islamic terror group - in the printout attached to all three drinks. 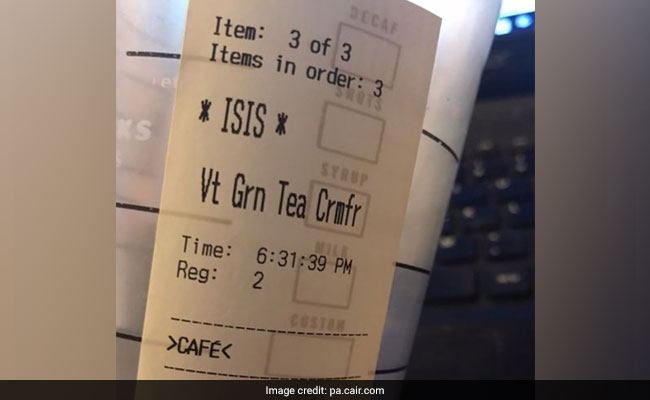 The incident has prompted an apology from Starbucks CEO Kevin Johnson.

In the same city where a Starbucks employee last year called police on black men for sitting quietly, two men in Islamic dress walked into a different Starbucks store for a drink.

Niquel Johnson paid for three drinks in Philadelphia on Sunday, and in typical Starbucks fashion, an employee asked for his name. Johnson, 40, told them "Aziz," his Islamic name pronounced ah-zeez. He has used it for 25 years - and "countless" times at that particular store.

But three unusual things happened on this occasion, he said. When his order was ready, a staffer announced them by drink type, not his name.

The second unusual part was the employee wrote his name as "ISIS" - the acronym for the Islamic terror group - in the printout attached to all three drinks.

Johnson didn't even realize it until later, when a friend pointed it out at a bookstore.

"I was shocked and angry. I felt it was discrimination," Johnson told The Washington Post on Friday.

The third unusual part: Four days later, after the story hit social media and a reporter tweeted about it, Starbucks called Johnson to claim the company had already rectified the situation in conversation with Johnson's niece - a person Johnson says doesn't exist.

It is not the first time the global chain has faced accusations of racism and discrimination in a Philadelphia store. Last year, an employee called police on two black men sitting in a downtown location, and they were led away in handcuffs.

The incident prompted an apology from CEO Kevin Johnson and national staff training on unconscious bias at 8,000 stores.

But this corporate response has been different, with representatives downplaying these new allegations.

"After investigating, we don't believe this was a case of discrimination or profiling," Starbucks spokesman Reggie Borges said in a statement. "The customer approached and provided the name Aziz. The barista mistakenly spelled it incorrectly. We have connected with Mr. Johnson and apologized for this regrettable mistake."

In an earlier statement, Borges said Starbucks contacted his "family" to apologize.

Except, Johnson said, it didn't happen that way.

A Starbucks district manager who called Johnson Thursday night said the company believed the issue had been resolved earlier in the week after speaking with a niece of Johnson's named Alora.

But Johnson said he has no niece named Alora. He doesn't even know anyone by that name - and Starbucks has been at a loss getting to the bottom of how, exactly, it discussed Johnson's case with someone he doesn't know after he left a phone number on an emailed complaint.

In a Thursday night call between Johnson and Starbucks representative Brian Dragone, a recording of which was provided to The Post, Johnson tells Dragone he has no niece named Alora, and his nieces are too young to speak for him anyway.

"So that is a new revelation for me and us, Niquel," Dragone says. "And I don't know how we got to that point. I apologize."

That person, Dragone claims, told another Starbucks staffer that the customer was an uncle who spells his name "Azese" - even though an email complaint sent by Johnson Monday and obtained by The Post shows his name as "Aziz."

Johnson corrects him. "No. My name is spelled A-Z-I-Z."

Dragone revisits the issue, pressing Johnson about the niece. He apologizes for the mix-up, suggesting Johnson was not contacted before Thursday because of the misunderstanding with his colleague. "I have no explanation for that. We're going to have to figure that out on our end who that was who we spoke to," Dragone says.

Borges said Friday the call from the woman and a delay between the online complaint being received by the store exacerbated the confusion. "The assumption was that we spoke to his niece. We thought the loop was closed," he said, adding that the company tried its best.

But who is the woman?

"I don't know," Borges said. "He says it's not a relative and I believe that."

The episode has further bewildered Johnson, who said he is considering legal action. He expected Starbucks to be more deliberate and careful after the other Philadelphia incident last year.

"I feel like they're not taking it seriously as it is," he said. "You think they would have their facts in order. How could they allow anyone to speak for me?"