No official reason was given for King's abdication, but it was the first time a king had stepped aside before the end of his term in the Muslim-majority country. 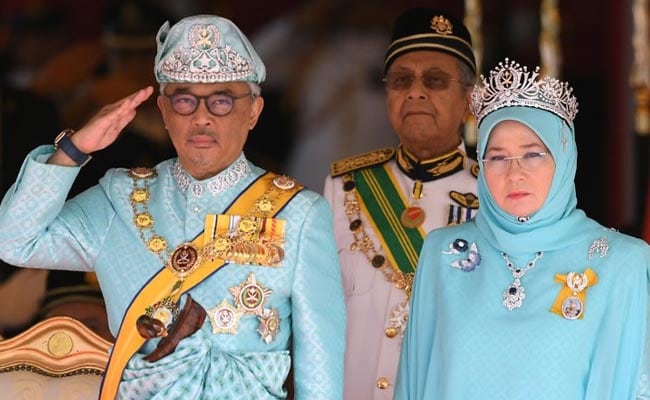 Malaysia on Thursday enthroned a new king, Sultan Abdullah Sultan Ahmad Shah, after the last monarch abdicated in a historic first following his reported marriage to a Russian ex-beauty queen.

In a ceremony steeped in pomp and centuries of tradition, the sports-loving sultan, dressed in aqua blue formal wear, took the oath of office at the national palace in Kuala Lumpur.

The ceremony was televised nationally and attended by Prime Minister Mahathir Mohamad and hundreds of guests decked out in Islamic finery.

Before being sworn in at the palace, the 59-year-old, who is also the ceremonial ruler of central Pahang state, was given a welcome at the national parliament and inspected a guard of honour. 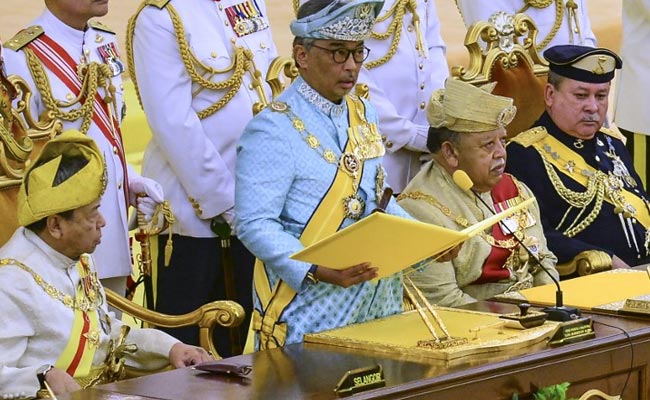 Before being sworn in at the palace, the 59-year-old Sultan Abdullah Sultan Ahmad was given a welcome at the national parliament and inspected a guard of honour

His predecessor, Sultan Muhammad V, stepped aside this month following just two years on the throne after he went on medical leave. Reports then surfaced he had married a former Miss Moscow.

No official reason was given for his abdication, but it was the first time a king had stepped aside before the end of his term in the Muslim-majority country.

Malaysia is a constitutional monarchy with a unique arrangement where the national throne changes hands every five years between royal rulers of the country's nine states.

Pahang was next in line for the throne after Muhammad V stepped down, and Sultan Abdullah was formally chosen as the country's 16th king by Malaysia's royal families last week.

The new king is an avid athlete who holds a string of positions on sporting bodies. He is on the council of world football governing body FIFA, president of the Asian Hockey Association, and used to be the head of the Football Association of Malaysia.

After attending school in Malaysia, the keen polo player went on to study in Britain  where he attended the Sandhurst military academy, according to a biography published on official news agency Bernama.

Portraits of the king and queen adorn government buildings throughout the country. The king is also the symbolic head of Islam in the nation, as well as the nominal chief of the military.

Malaysia's sultans trace a lineage back to the 15th century. The king is referred to as Yang di-Pertuan Agong, or "He Who Is Made Lord".