She said she hoped that telling her story "will empower women to come forward and not feel bad. . . . I blamed myself and I was silent and I felt guilty. I beat up myself terrible." 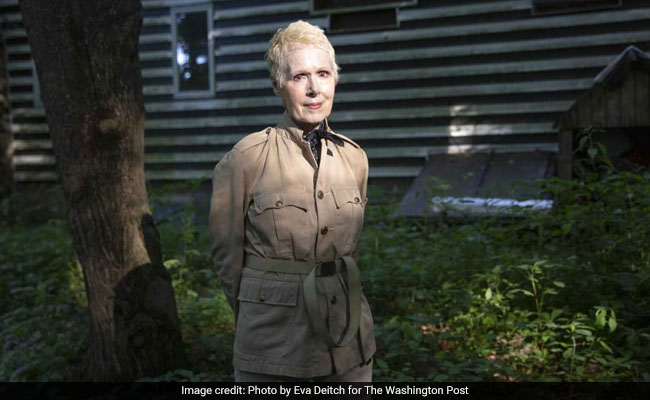 Jean Carroll claimed she was sexually assaulted by Trump at Bergdorf Goodman in 90's.

In an interview with The Washington Post on Friday afternoon, Carroll reiterated the allegations, saying that during a chance encounter with the then-real estate developer at Bergdorf Goodman in late 1995 or early 1996, Trump attacked her in a dressing room. She said he knocked her head against a wall, pulled down her tights and briefly penetrated her before she pushed him off and ran out.

She said she hoped that telling her story "will empower women to come forward and not feel bad. . . . I blamed myself and I was silent and I felt guilty. I beat up myself terrible."

Carroll, now 75, said she told two close friends about the episode at the time. One of them told The Post on Friday that Carroll described the incident to her shortly after it occurred and that she had unsuccessfully urged Carroll to go to the police.

Trump vigorously denied the accusation, calling it "fake news." He questioned why there was no video footage of the incident or witnesses in the store.

"I've never met this person in my life," the president said in a statement. "She is trying to sell a new book - that should indicate her motivation. It should be sold in the fiction section."

The New York magazine piece includes a photo provided by Carroll of what appears to be Trump pictured from behind, standing with his then-wife, Ivana, and Carroll's then-husband, John Johnson, at what Carroll said was an NBC party around 1987.

In his statement, Trump asked that anyone who has information that Carroll or the magazine were working with the Democratic Party to come forward. "It is a disgrace and people should pay dearly for such false accusations," he said.

Carroll, a registered Democrat, said she voted for Hillary Clinton in 2016. She donated $1,000 this cycle to Emily's List, which supports female candidates who back abortion rights, and $500 to President Barack Obama's reelection campaign in 2012, according to campaign finance records. On Twitter, she has posted several sharp remarks about Trump and retweets of satirical and critical articles about him.

Carroll, a longtime advice columnist for Elle magazine, is among 16 women who have publicly accused Trump of sexual misconduct over the past several decades. Most spoke out just weeks before the 2016 election, after The Post published a recording of Trump bragging during a 2005 "Access Hollywood" interview that his celebrity gave him permission to grab women by their genitals.

Trump has denied the allegations and called the women "liars."

One Trump accuser, former "Apprentice" contestant Summer Zervos, is suing the president for defamation in New York, a case in which her lawyers may have the opportunity to question him under oath. Zervos alleges that Trump forcibly kissed and groped her at the Beverly Hills Hotel in December 2007.

Carroll's allegation about Trump is among the most violent of the accusations against him. His ex-wife, Ivana, said in a divorce deposition that he "raped" her in 1989, but later said, "I do not want my words to be interpreted in a literal or criminal sense."

Carroll said she didn't come forward in 2016 because other women did, adding that she "didn't have the guts." But now, inspired by the #MeToo movement that began in late 2017, she said, "It's time. It's time."

She said she felt like she had disappointed all the readers of her "Ask E. Jean" column in Elle magazine who have confided in her about their problems with men over the past 26 years. Like many of the women who told her they had been sexually assaulted, Carroll said she blamed herself for the incident. "I thought I was stupid," she said. "I really thought I had done it."

Carroll spoke by phone to The Post hours after New York magazine posted an online excerpt of her forthcoming book, "What Do We Need Men For?" She also did interviews Friday with other news organizations, her publicist said.

Trump is among a number of men who forced themselves on her, Carroll alleges in her book. She writes that Les Moonves, the once-powerful chief executive of CBS who resigned a year ago after several women accused him of sexual misconduct, grabbed her in an elevator of a Beverly Hills hotel after she interviewed him for a 1997 Esquire magazine story.

"He went at me like an octopus," she said. "I actually thought he had grown extra arms."

A spokesman for Moonves referred the The Post to a statement the former CBS chief gave New York magazine, in which he "emphatically denies" the episode. Dana McClintock, a CBS spokesman, declined to comment.

Carroll said her encounter with Trump began one weeknight evening, when she ran into him as she was leaving the department store. At the time, Carroll was hosting a cable television show and she said he recognized her, calling her "that advice lady."

"He was very good looking at the time and personable," she said. She said he asked her to help him pick out a present for a woman. When Carroll asked how old the woman was, she said Trump responded by asking her age. She told him she was 52, to which she said he responded, "You're so old." Trump would have been about 49 at the time.

Carroll said he considered buying a fur hat and then led her up the escalator to the lingerie department. She said the area was empty. He picked up some lingerie, a flimsy gray bodysuit, and asked her to try it on, suggesting she was "in shape, " she said. She said that she responded by urging him to put it on.

"It occurred to me it would be very funny if I could get him to try it on over his pants," she said. "I just thought this was the greatest joke in the world."

But after they walked into the dressing room, she said Trump pinned her against the wall, tried to kiss her and touched her genital area. Then he unzipped his pants and sexually assaulted her.

"It was shocking. I fought, it was against my will," Carroll said, though she didn't scream. "I laughed. That's how I deal with it. Adrenaline was pouring through my body."

Carroll provided The Post with the names of the two friends she said she had told about the incident at the time. One could not be reached Friday evening.

The other friend, who spoke on the condition of anonymity to protect her privacy, said Carroll called her either the day of the alleged attack or the next day and described the assault.

The friend, an author and former TV morning show correspondent, recalled Carroll was laughing slightly manically as she recounted what happened. "It's not funny," the friend said she told Carroll. "He raped you." She said she urged Carroll to go to the police, but she said Carroll refused, saying it was just 15 minutes of her life and she wanted to move on. The friend said Carroll made her promise to never tell anyone.

The alleged incident occurred too long ago to bring charges. Although the New York state legislature ended statutory limits on forceable rape in 2006, the new law applies only to crimes that occurred in 2001 or later.

On the cover of New York magazine, Carroll is featured wearing the black Donna Karan coatdress that she said she had on when Trump attacked her.

She said it has been hanging in the back of her closet since that day and that she has never considered testing it for DNA evidence. She said she has not had sex since the incident.

(Except for the headline, this story has not been edited by NDTV staff and is published from a syndicated feed.)
Comments
Jean CarrollDonald Trump