Long-Haul Covid Symptoms Now Hitting Those Under 20 In US

Families whose children are afflicted are plunged into a terrifying maze of symptoms that come and go, and have no knowable end point. 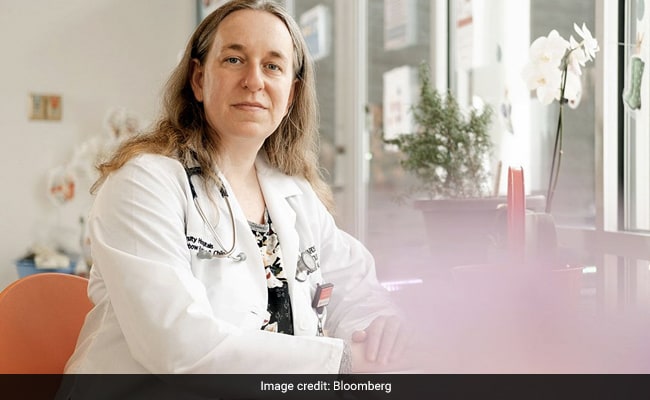 One of the few statistical comforts of the otherwise nightmarish Covid-19 pandemic - that it largely spares young people - is fading: The long-haul symptoms that have stricken many U.S. adults are now hitting those under 20.

A relatively small but increasing percentage of children are struggling for months with extreme fatigue, rapid heart rate, memory loss, depression and other symptoms. In one sign of their growing numbers, the UH Rainbow Babies and Children's Hospital in Cleveland is opening a Long Haul Clinic just for young people, the first of its kind in the country.

Families whose children are afflicted are plunged into a terrifying maze of symptoms that come and go, and have no knowable end point. Katie Krol, 42, got the virus from a co-worker at a Michigan engine plant in March 2020 and brought it home to her two youngest children. All three continue to suffer.

"This has turned their lives inside out," Krol said. "Doctors are saying in six months or in 12 months they will be better. The fallacy that kids don't get this is so frustrating."

Even the family of one of the Biden administration's top Covid advisers, Andrew Slavitt, is dealing with the same issue. At a White House briefing Tuesday, he revealed that one of his "young and fit" sons was infected by the virus six months ago, but still experiences shortness of breath and frequent flu-like symptoms. Slavitt said the family has no idea how long it will last.

Even as U.S. cases decline overall, researchers are investigating whether Covid-19 is becoming more severe for children now that variants are causing localized flare-ups. In early April, the case rate in young children and early teens began surpassing that of those 65 and older, according to the Centers for Disease Control and Prevention. And hospitalizations for children with Covid aren't falling as much as for those 18 and up.

"The pediatric piece of this is pretty neglected," said Amy Edwards, associate medical director of pediatric infection control at University Hospitals in Ohio. "Kids with long haul have brain fog, chronic fatigue, fevers on and off, weird rashes. Long-haulers don't go to the hospital. They suffer at home."

The decision by federal authorities last week to let 12- to 15-year-olds get the Covid inoculation heartens physicians who have seen vaccinations allow some patients to overcome long-haul symptoms. But it doesn't help everyone, and many others still see no reason to get the jab.

"I get a lot of, 'Well, I'm young and healthy, so I don't need to get vaccinated," said Rena Daiza, a family medicine specialist at Henry Ford Health Systems in Michigan. "But people don't realize that these symptoms that persist are very debilitating."

A study published last week by Scientific Reports that looked at data from more than 12,000 child patients found that the majority don't show typical Covid symptoms like fever, cough or shortness of breath. Almost 19% reported fever, malaise, muscle or joint pain, and disturbances of smell or taste. More than 16% had respiratory symptoms, 14% had gastrointestinal problems, and a few required critical care.

Michigan's chief medical official, Joneigh Khaldun, has said parents should remain vigilant about protecting children from the virus - and seek medical treatment if they experience symptoms - even though overall infections and deaths are edging downward in the state. Some children "have wound up in the intensive care unit, and some have lost their lives," Khaldun said at a news conference with Governor Gretchen Whitmer. "I'm asking every primary-care provider to enroll as a vaccine provider. The most important thing we can do is to make vaccines available."

Since new variants of the virus have raced through younger populations, cases of long-haul Covid among them have jumped, along with multisystem inflammatory syndrome, or MIS-C, a condition that can inflame the heart, lungs, brain and other organs. The CDC says 3,742 children in the U.S. have been diagnosed with the syndrome, but that number is likely low because the data relies on voluntary reporting from overburdened hospitals and state health departments - unnerving news for parents of unvaccinated children under 12. Most MIS-C cases have occurred in children ages 5 to 14, according to the CDC.

For young long-haulers, the lack of initial symptoms can give a false sense of security. After Krol brought Covid home, her 10-year-old daughter, Emma, seemed to shrug off the virus and had almost no symptoms. Her son, Rhys, 14, slowly developed them.

Eight weeks later, the real nightmare began. Rhys and Emma complained of fatigue, headaches and an occasional racing heart rate that could exceed 100 beats a minute and surge over 160, Krol said. Her daughter was losing her sense of taste and complained that meat tasted metallic. She still hasn't fully regained her ability to taste and doesn't feel like eating, Krol said. Katie Krol with Rhys and Emma.

Both children struggle with memory issues - "brain fog," doctors call it - that make school difficult. They have trouble focusing in virtual, online classes. Emma, once an A student, is now getting Cs. "I'm really tired all the time, and I'm forgetting things," Emma said.

Rhys has had it worse with fatigue. Krol once found him asleep on the kitchen floor. He couldn't recall how he got there. If he's standing for more than an hour, his feet swell and turn red. Struggling to stay awake during virtual school sessions, he'd forget to turn in assignments after he completed them.

The boy had to transfer from Henry Ford High School in the Detroit suburb of Sterling Heights to the district's Alternative Learning Center to get caught up. Even so, Rhys, who lost his train of thought at times during an interview, said he may be unable to finish all of the requirements and will do virtual summer classes. "Because of the amount of credits I need, I might have to do ninth grade again," he said.

Even for children who don't struggle as long as the Krols, Covid can still be a travail. Kathryn Rankin, a 15 year-old high school sophomore in Las Vegas, tested positive Feb. 23. Two days later, she had migraines and light sensitivity so severe she couldn't look at her computer screen for remote learning, said her mother, Rochelle.

By day 14, the headaches were gone but Kathryn was too fatigued to get out of bed. Repeated trips to the emergency room and doctors have yielded few answers. Kathryn is slowly improving, but her grades have suffered and she gave up on swimming for the year because of fatigue. More than 80 days after testing positive, she has to wear compression socks at all times to avoid leg pain. "I'm seeing improvement in her slowly," Rochelle said. "But as a teenager, three to six months is a lot of time."

Edwards, who is running the new University Hospitals clinic, estimates about 1% of children who have Covid come down with long-term illness, though good data are scarce. She estimates there are more than 100 in Ohio.

Given the many unanswered questions, Edwards created the clinic with a multidisciplinary team of experts within the University Hospitals system. The clinic will include about a dozen specialists to cover the wide range of MIS-C and long-haul problems. Patients can go to any location and have their case reviewed by pulmonologists, cardiologists, dieticians or whomever else is needed.

"I'm hoping that by establishing a more systematic approach, we can provide more support and get them better," Edwards said.

High-dose steroids have helped some patients, she said, and doctors have discovered that vaccinations have helped others shake off long-haul symptoms faster. But "it doesn't appear to work for everybody."

Anxiety and depression often haunt long-haulers, said Daiza, the family medicine specialist at Henry Ford Health Systems. She said she has prescribed more medication for both conditions while treating Covid patients than she has in her entire career.

Emma Krol has developed severe anxiety, with nightmares and panic attacks. She's terrified of getting the virus again. The entire family is in lockdown until they're all vaccinated.

"Given what it did to us," her mother said. "I don't know what would happen if we caught it a second time."