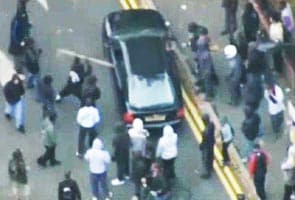 London: Rioters in London have forced people to strip naked in the streets before stealing their clothes, a media report said on Tuesday.

There were shocking scenes as rioters stole clothes and rifled through bags as people made their way home, the Daily Mail reported.

Internet rumours on Monday night claimed that besides destruction across London and Birmingham, people were having their clothes removed by looters as police attempted to contain the criminality, the newspaper said.

Reports on Twitter claimed some people were being stripped, while another shocking video shows a bleeding teenager being robbed in broad daylight by lawless thugs who pretend to help him to his feet.

The video showed an unnamed teenager being apparently assisted by passersby after being spotted injured and bleeding on the ground.

But seconds after the vulnerable boy is helped up, callous looters instead start rifling through his rucksack.

With over a dozen thugs standing nearby, the teenager tries to stop the bleeding from his head as thieves continue the daylight robbery.

Promoted
Listen to the latest songs, only on JioSaavn.com
A man who is clearly seen picking items from the teenager's bag then wanders off with his loot, before carelessly discarding the items on the floor, the Mail added.

A spokesperson for the Metropolitan Police could not confirm reports of people being stripped.