Lifeguard Training From 50 Years Ago Kicked In: British Diplomat Who Saved Chinese Student

Stephen Ellison, Britain's consul general in Chongqing, had been at a nearby scenic spot last Saturday when suddenly "there was a big commotion" after a female student accidentally fell into the river, he told Reuters during a video call on Wednesday. 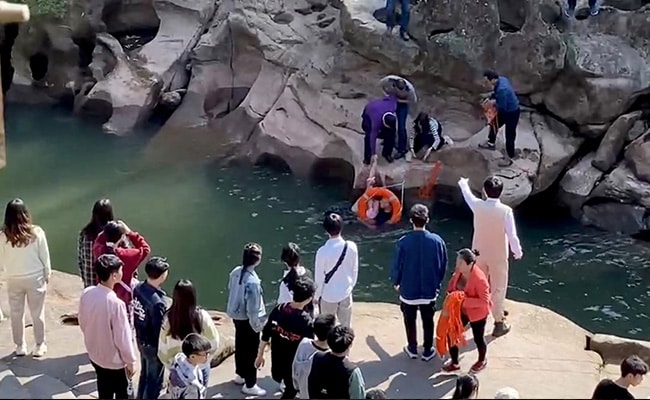 A British diplomat hailed as a hero for rescuing a drowning student in southwest China over the weekend said he felt a deep sense of relief when he saw that the woman had resumed breathing and would be all right.

Stephen Ellison, Britain's consul general in Chongqing, had been at a nearby scenic spot last Saturday when suddenly "there was a big commotion" after a female student accidentally fell into the river, he told Reuters during a video call on Wednesday.

Ellison, 61, who assumed his post in Chongqing in October, has been widely praised on Chinese social media, where dramatic videos of the rescue have become a top-trending item.

"It was pretty clear quite quickly that she was in trouble. She couldn't swim and she was submerged when she came up and she was floating on the surface of the water," he said.

Seeing that she "was going to lose her life", the former civil engineer said some lifeguard training 50 years ago in Malta "clicked in".

"I whipped my shoes off and jumped in," he said.

"I got to her quite quickly and turned her over. But she wasn't breathing and she was unconscious so I really did fear the worst for a few moments actually," Ellison added.

People on the riverbank threw Ellison a lifebuoy and dragged the two to safety.

But for about half a minute, as they were approaching the shore, the woman still did not breathe.

"When she started breathing again it was just a really, really deep sense of relief," Ellison said.

After he was sure the woman would recover, Ellison was taken in by the villagers "and looked after very well," he said.

They washed and dried his clothes and gave him coffee before he was reunited with the woman he saved.

"She came and we met which was very sweet," he said. "She was clearly a little shocked but she was in good shape."

The woman, who is 24 and has not been publicly identified, has invited Ellison to a meal to express her thanks, which said he would be "delighted" to join.

"It's a great story, and if people take some pleasure from that, then great," Ellison said, declining to be drawn on whether his actions could improve strained relations between China and Britain.

"I don't think it matters whether one is a diplomat, civil engineer, a student or whatever, that when things like this happen, then there's a human reaction which is quite heartening isn't it? That we feel that we can help, and that's the way it should be," he said.