Life term for US soldier who killed 16 Afghan villagers 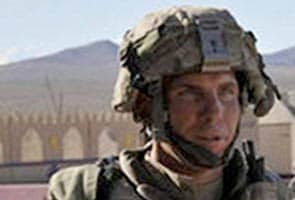 File picture of US soldier Robert Bales in Afghanistan

Washington: A US army sergeant who murdered 16 Afghan villagers in a horrific rampage was sentenced to life in prison with no possibility of parole on Friday.

A six-member military panel returned their sentence on 40-year-old Robert Bales after less than two hours of deliberations following a harrowing five-day hearing.

Afghan survivors of the soldier's massacre were in the court-room at the Joint Base Lewis-McChord in Washington State on Friday as Bales was ordered to spend the rest of his life behind bars.

A translator gave the Afghan witnesses a thumbs-up signal as Bales was led away after prosecutors had closed their case by branding him "the worst kind of criminal."

Bales relatives sobbed as the sentence was returned. The soldier was also given a dishonorable discharge and ordered to forfeit all pay.

Bales had pleaded guilty to the killings in June in a deal brokered by his defense in order to avoid the death penalty.

The only issue for the sentencing hearing to decide was whether he should be allowed the opportunity to apply for parole after a minimum of 20 years in jail.

However, the military panel gave the strongest possible sentence after a powerful submission by prosecutor Lieutenant-Colonel Joseph Morse.

"There is only one appropriate sentence for the senseless slaughter of 16 innocent people - a sentence reserved for the worst crimes and worst criminals - confinement for life without eligibility for parole," Morse said.

Morse recounted the horrific trail of destruction left by Bales on the night of March 11, 2012 when he quietly slipped away from his base to attack a nearby village in the Panjwayi district of southern Kandahar province.

The prosecution showed graphic photos of Bales' victims including an old woman who was the soldier's last victim.

"Bales stomped on her head with such force that the next morning when her nephew tried to move her, her eyeballs fell out of her head," Morse told the six-member panel.

The prosecution also dismissed Bales' unsworn statement to the hearing on Thursday when he apologised for his actions but offered no explanation.

"Sergeant Bales is a man with no moral compass, with no man to blame and nothing to blame but himself," Morse said.

The soldier's actions had directly impacted no fewer than 48 children, the prosecutor said.

"There will never be enough time for Haji Wazeer to share with you the pain he feels in his heart," Morse added, citing the grief of one Afghan villager who lost 11 family members in the attack.

"Is Sergeant Bales' freedom worth that? The memories of a dead husband or father or brother?"

Bales' defense, meanwhile, appeared to anticipate the outcome, asking only for the panel to give Bales a glimmer of hope.

"We're not here to decide whether he walks out of this court room into the sunshine having not been punished for what happened. He's going to be confined for life," Emma Scanlin said.

"What we're asking is simply that years from now, if ever, if ever, if he has done what someone else deems to be necessary for him someday to walk outside that that decision can be made down the road, that's all."

Promoted
Listen to the latest songs, only on JioSaavn.com
Although sentenced to life without parole, Bales could in theory seek clemency after serving 20 years of his sentence.