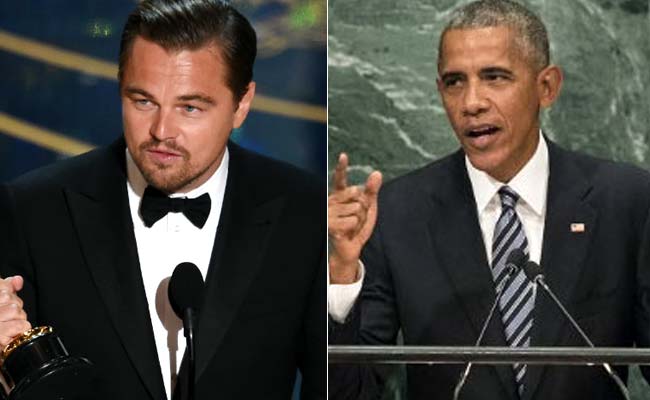 Barack Obama and Leonardo DiCaprio are to hold a talk on climate change.

Washington, United States: Oscar-winner Leonardo DiCaprio was due at the White House Monday to discuss climate change with President Barack Obama before the screening of the actor's new documentary on the devastating effects of global warming.

DiCaprio, who won the 2016 best actor Academy Award for "The Revenant," has been an environmental activist for years. He will meet with Obama and scientist Katharine Hayhoe, an atmospheric science professor at Texas Tech University.

Obama has made the fight against global warming a priority of both his terms in office.

The meeting will take place as part of a festival on the lawn of the White House on the South by Southwest model, which is held annually in Austin, Texas. It is a wild blend of new technologies, movies and music.

Promoted
Listen to the latest songs, only on JioSaavn.com
Almost a decade now since his first documentary about climate challenge, entitled "The 11th Hour," the actor and producer is now promoting a film called "Before The Flood" in which Obama and Pope Francis made a brief appearance.

In March, Obama became the first US president to attend South by Southwest, a trendy festival combining web designers, bloggers, entrepreneurs and artists. At the time, he announced that the White House would organize its own version of the meeting, called South by South Lawn, to celebrate creativity and innovation.