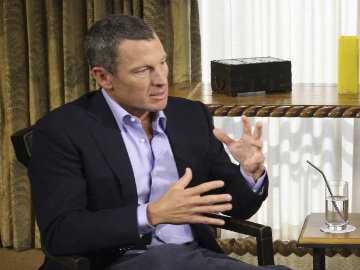 File Photo: Lance Armstrong appears on a taping for the show "Oprah and Lance Armstrong: The Worldwide Exclusive" in Austin, Texas. Armstrong admitted that he led a doping scheme but peppered his apology with excuses rather than contrition.

Paris, France: Lance Armstrong has been stripped of his award in the Legion of Honour, the best-known recognition in France.

Armstrong was given the rank of "Chevalier" - or Knight - in the "Legion d'Honneur" in 2005, the last year of his seven consecutive Tour de France victories. He was later stripped of those titles for doping.

A Legion of Honour official, who wasn't authorized to be quoted by name, said Wednesday she was unable to indicate when the decision was made to remove Armstrong's award. She said the organization doesn't traditionally announce it publicly when honorees lose their decoration.

Promoted
Listen to the latest songs, only on JioSaavn.com
The Legion of Honor was created under Napoleon Bonaparte in 1802, and roughly 1 million people have received it over the years. It is France's highest honor.