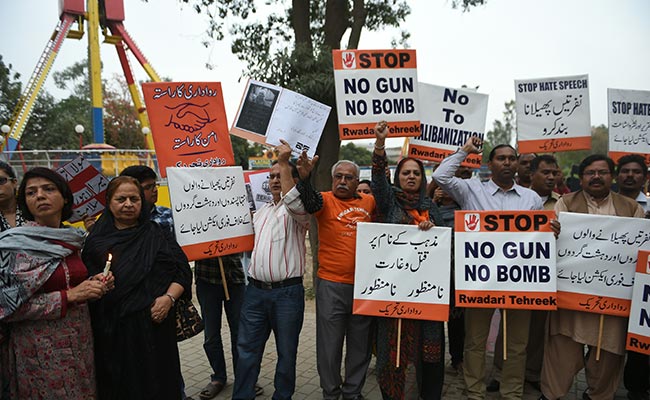 Lahore: Over 5,000 people were rounded up in the two days since the Easter Sunday bombing in Lahore with more than 200 still in custody, Pakistan's Punjab Province Law Minister said today and announced that a Joint Investigation Team has been formed to probe the attack.

"As 5,221 people were initially rounded up from different parts of Punjab out of which 5,005 have been released after verification of their documents," Punjab Province Law Minister Rana Sanaullah said at a press conference.

"However, 216 suspects are still under custody for further investigation," he said, informing about the developments in the probe into the attack that claimed 73 lives.

About 56 intelligence-based operations were carried out by the Punjab police whereas 16 raids were conducted by the counter-terrorism department, Mr Sanaullah said.

He, however, rejected the notion that terrorists have safe havens in Punjab, saying civil-military agencies have been carrying out operation across the province under the continuing National Action Plan.

"There is no no-go area in the Punjab. There are some people who are bent on giving an impression that there are terror sanctuaries in the province," he said.

"We have geo-tagged all madarsas in the province and the provincial government knows how many students are currently studying in those madarsas," the Minister asserted.

Talking about investigations into the Lahore attack, the Law Minister said a Joint Investigation Team (JIT) has been formed to probe the incident, which will be headed by the SSP Counter Terrorism Department.

The brutal attack by a suicide bomber -- believed to be in his 20s -- was claimed by the Jamaatul Ahrar, a splinter group of the Tehrik-i-Taliban Pakistan (TTP).

At least 73 people were killed and 300 others were injured in the suicide bombing.