The 44-year-old anti-corruption campaigner fell ill on a domestic flight last month and was treated in a Siberian hospital before being evacuated to Berlin. 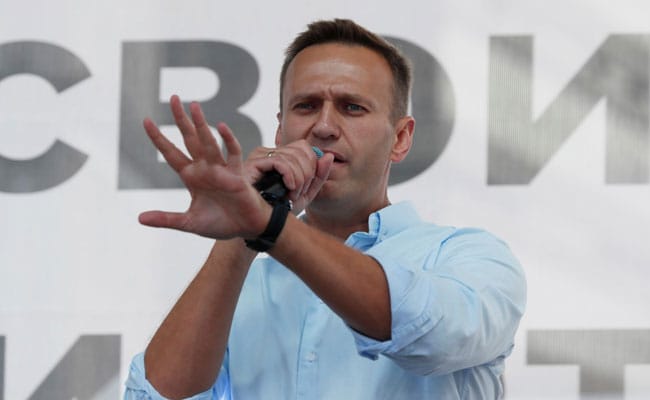 Russian opposition leader Alexei Navalny, who Germany says was poisoned by a weapons-grade Novichok nerve agent, is now out of a medically induced coma and reacting to speech, the Berlin hospital treating him said Monday.

The 44-year-old anti-corruption campaigner and one of President Vladimir Putin's fiercest critics, fell ill on a domestic flight last month and was treated in a Siberian hospital before being evacuated to Berlin.

"He is responding to verbal stimuli," Charite hospital said in a statement, reporting that his condition "has improved".

Navalny is also being weaned off mechanical ventilation, but the hospital said it was too early to determine the long-term impact of the poisoning.

Germany said last week that toxicology tests conducted by its armed forces found "unequivocal evidence" that Navalny had been poisoned with Novichok, the substance used in the 2018 attack on a former Russian double agent and his daughter in the English city of Salisbury.

Navalny's associates say the use of Novichok, a military-grade nerve agent, shows that only the Russian state could be responsible, but the Kremlin fiercely denies any involvement.

Russian officials have accused Germany of being slow to share the findings of its investigation, despite a request from prosecutors.

"We expect information (from Germany) to be provided in the coming days," Peskov said. "We are looking forward to it."

But Germany warned that the failure by Moscow to thoroughly investigate the incident could have serious consequences.

German Foreign Minister Heiko Maas said Sunday that Berlin, which holds the rotating EU presidency, will discuss possible sanctions against Russia if the Kremlin does not soon provide an explanation for what happened to Navalny.

Otherwise, Germany will be compelled to "discuss a response with our allies" including "targeted" sanctions, Maas said.

He did not rule out action relating to Nord Stream 2, a multi-billion-euro Russian-German gas pipeline nearing completion.

German Chancellor Angela Merkel's spokesman said Monday that she was in agreement with Maas, who is a member of junior coalition partner Social Democrats.

She too would not rule out consequences for Nord Stream 2 -- a 10 billion euro ($11 billion) pipeline beneath the Baltic Sea that is set to double Russian natural gas shipments to Germany, Europe's largest economy.

It has long been in the crosshairs of the United States, which has criticised European countries for their reliance on energy from Russia.

US President Donald Trump has signed legislation that targets contractors working on the project, meaning that German companies face sanctions for even small investments.

"Sure," said Trump when asked at a White House news conference Monday whether he thought Germany should cancel the project.

But he did not know if Germany was in a position to do so right now, he said, "because Germany is in a very weakened position energy-wise".

Western leaders have expressed horror at what Navalny's allies say is the first known use of chemical weapons against a high-profile opposition leader on Russian soil.

Britain on Monday said it had summoned Russia's ambassador to voice its "deep concern" over the poisoning.

"It's completely unacceptable that a banned chemical weapon has been used and Russia must hold a full, transparent investigation," wrote British Foreign Secretary Dominic Raab on Twitter.

The condemnation echoes other Western voices, and Merkel too has said that "only Russia can and must" provide answers on the incident.

The Navalny poisoning is the latest in a long series of assassination attempts against Kremlin critics.

Already suffering from wide-ranging Western sanctions imposed over its 2014 annexation of Crimea, as well as the effects of the coronavirus pandemic and the drop in oil prices, Moscow is anxious to avoid any further pressure on its economy.

Navalny's aides have said they suspect he drank a cup of spiked tea at the airport.

The charismatic Yale-educated lawyer was initially treated at a Russian hospital, where doctors said they were unable to find any toxic substances in his blood, before he was flown to Berlin for specialised treatment on August 22.