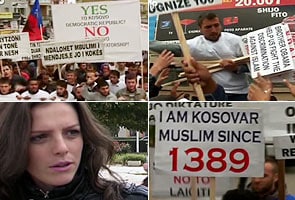 Pristina: Hundreds of Kosovo Muslims took to the streets on Friday to protest against a ban by authorities to wear a Muslim headscarf in school.

The protesters, many of them devout Muslims, chanted anti-government slogans as they walked through the capital, Pristina, to a government building.

Some carried placards reading "Stop Discrimination" and "Unveil the mind, not the head."
One large placard read "Yes to Kosovo Democratic Republic, No to Kosovo Anti-Islamic Dictatorship."

"This is an obligation from Allah and I think I will soon join the women here and put on a headscarf," said one protester.

Promoted
Listen to the latest songs, only on JioSaavn.com
While Kosovo's constitution guarantees religious freedom, education authorities have banned the display of religious symbols - including the wearing of headscarf Kosovo - in schools.

Most recently, a 16-year old girl was suspended from a high school for wearing a headscarf.
Some 90 percent of Kosovo's 2 million people are ethnic Albanian Muslims.