Joining US In "Maritime Security Mission" In Gulf: UK

"This deployment will reinforce security and provide reassurance for shipping," Foreign Secretary Dominic Raab said in a statement. 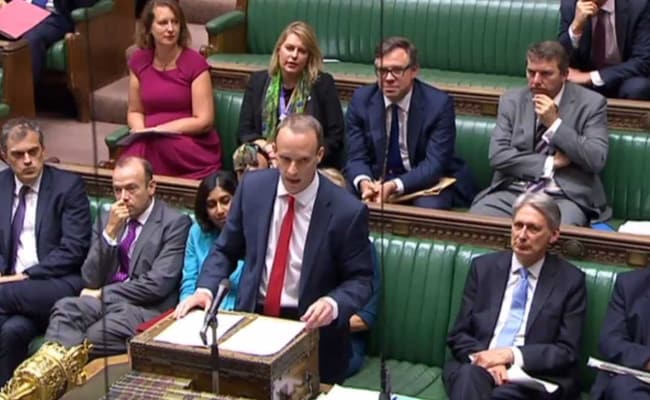 Dominic Raab insisted that despite the coalition Britain's approach to Iran had not changed.

Britain on Monday said it would join the United States in an "international maritime security mission" to protect merchant vessels in the Strait of Hormuz amid heightened tension with Iran.

The move follows a spate of incidents -- including the seizure of ships -- involving Iran and Western powers, in particular Britain and the US, centred on the vital Gulf thoroughfare.

"This deployment will reinforce security and provide reassurance for shipping," Foreign Secretary Dominic Raab said in a statement.

"Our aim is to build the broadest international support to uphold freedom of navigation in the region, as protected under international law."

Raab insisted that despite the coalition Britain's approach to Iran had not changed.

"We remain committed to working with Iran and our international partners to de-escalate the situation and maintain the nuclear deal."

The US has been struggling to piece together an international coalition to protect cargo ships travelling through the Gulf, with allies concerned about being dragged into conflict with Iran.

The British announcement will be seen as a boost to US President Donald Trump as he continues to step up a campaign of "maximum pressure" against Tehran.

London has sought to distance itself from his hardline stance, insisting along with other European backers of the accord that it could still be salvaged, while trying to remain a steadfast US ally.

But it has found that balancing act increasingly difficult to maintain following a flare-up in relations with Iran over shipping.

On July 4 British Royal Marines helped authorities in Gibraltar -- a British Overseas Territory -- seize an Iranian tanker on suspicion it was carrying oil to Syria in violation of EU sanctions.

Tehran threatened reprisals and two weeks later its Islamic Revolutionary Guard Corps intercepted the British-flagged tanker "Stena Impero" as it made its way through the Strait of Hormuz. It has detained the ship at an Iranian port.

On Sunday, Iranian state media said it had seized another foreign tanker in the Gulf.