John Oliver baked a massive marble cake that had an image of the "human rights-abusing" Turkmenistan President being thrown from his horse in a race. 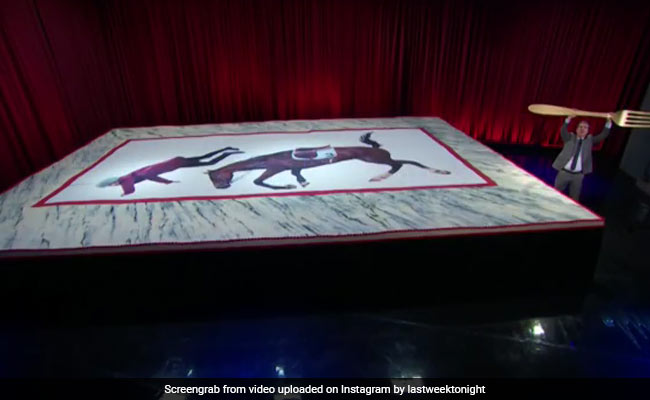 John Oliver, the US television host who is known for his wicked sense of humour and witty jokes, would have never thought that a funny episode meant to address Turkmenistan President Gurbanguly Berdimuhamedov's obsession will attract strong backlash from the Guinness World Records.

Oliver began his ''The Last Week Tonight'' segment show on Sunday with jokes about death rumours of the Turkmenistan president but ended up baking a massive marble cake that had an image of the "human rights-abusing" Berdymukhamedov being thrown from his horse in a race.

Oliver detailed "bizarre obsessions," of Berdimuhamedov like horses. He said the leader has nearly 10 per cent of the world's total of Akhal-teke horses and gave himself the title of "national horse breeder."

During the show, he also took a dig at Guinness World Records, which he said works with authoritarian governments, which includes Turkmenistan, Saudi Arabia, and the Dubai police force, in order for them to break records. Oliver chalked it up to perpetuating the "cult of personality."

The British-born comic Oliver pointed out that Guinness World Records, which had no problem sending its adjudicators to countries like Turkmenistan and Saudi Arabia had declined to participate in the HBO show's record-breaking attempt at creating the "world's largest marble cake".

"We were disappointed to see the false and unfair allegations about Guinness World Records in Sunday's episode of ''Last Week Tonight with John Oliver," said the body in the statement

The body said that they were asked to provide a judge to officiate the so-called world record attempt for "largest cake with an image of someone falling off a horse".

"On the basis that it was merely an opportunity to mock one of our record-holders, we declined. It is our policy not to partake in any activities which may belittle their achievements or subject them to ridicule," it added.

So far Oliver has not reacted to the Guinness's statement.