The tweet came minutes after outgoing President Donald Trump flew out of Washington at the end of a tumultuous four-year presidency. 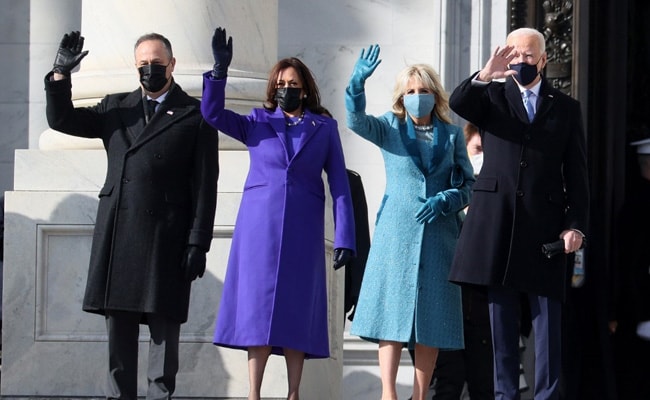 Earlier in the day, Mr Biden attended a mass at St Matthew's Cathedral in Washington, DC

Joe Biden said it was "a new day in America" on Wednesday as he prepared to become the 46th president of the United States at an inauguration ceremony in Washington.

"It's a new day in America," Mr Biden said on Twitter only minutes after outgoing President Donald Trump flew out of Washington at the end of a tumultuous four-year presidency.

Mr Trump left Washington on Wednesday just three hours ahead of the inauguration of his successor Joe Biden, saying it had been an "incredible four years" and promising to be "back in some form."

"I just want to say goodbye but hopefully it's not a long-term goodbye," Mr Trump said in remarks to reporters at the White House before he and First Lady Melania Trump walked a short red carpet and boarded Marine One for the helicopter ride to Joint Base Andrews.

Earlier in the day, Mr Biden attended a mass at St Matthew's Cathedral in Washington, DC, accompanied by Democratic and Republican leaders of Congress in a symbol of unity ahead of his inauguration.

Mr Biden plans to kick off his new administration with orders to restore the United States to the Paris climate accord and the World Health Organization, aides said.

Mr Biden will sign 17 orders and actions hours after being sworn in as US leader to break from policies of departing President Donald Trump and set new paths on immigration, the environment, fighting Covid-19 and the economy, they said.

In first-day moves, he will end Mr Trump's much-assailed ban on visitors from several majority-Muslim countries and halt construction of the wall that Trump ordered on the US-Mexico border to stem illegal immigration.

He will also set a mask mandate on federal properties to stem the spread of Covid-19; restore protections of nature reserves removed by Trump; and seek freezes on evictions and protection for millions behind on their mortgages due to the coronavirus pandemic.

He also plans to send a bill to Congress to revamp immigration policies and give millions of undocumented migrants living in the country a path to citizenship that the Trump administration denied.

Mr Biden "will take action -- not just to reverse the gravest damages of the Trump administration -- but also to start moving our country forward," the aides said in a statement.