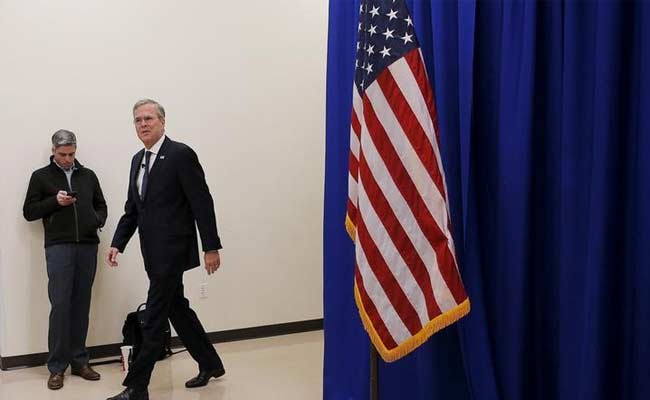 Meredith: US Republican presidential candidate Jeb Bush on Wednesday ruled out a third-party candidacy should Donald Trump win the party's 2016 nomination but held tight to his belief that Trump is a "jerk" and not qualified to be president.

At a town hall meeting in New Hampshire, a questioner asked the former Florida governor whether he would launch an independent run for the White House if Trump were to win the Republican nomination for the November 2016 presidential elections.

"No. I'm not going to run as a third-party candidate, no matter who wins the nomination," Bush said. "I've been supporting Republicans since Richard Nixon."

Trump, a billionaire real estate developer and reality television star, has been leading the Republican field.

Bush, lagging in the polls nationally and in the early voting state of New Hampshire but drawing energetic crowds during an intense focus on the state, insisted he would ultimately win the nomination.

But he was reminded of the popularity of Trump when Tom Emanuel, a selectman from nearby Laconia, New Hampshire, told Bush he was leaning toward supporting Trump and wanted to know why Bush had recently called the New York mogul a "jerk."

Looking at his watch, Bush drew laughter in the crowd when he replied: "Let me see how much time we have."

Turning more serious, Bush said he admired some aspects of Trump, such as his successful business record, although he said he thought Trump might have exaggerated some of it, and to an extent liked his ability to speak his mind without resorting to politically correct statements.

Still, he said, Trump's disparaging of a disabled New York Times reporter and frequent insults of other people have gone too far.
"When somebody disparages a person with disabilities, that sets me off," he said. "That's why I called him a jerk."

Bush has more than any of his Republican rivals taken aim squarely at Trump and tried to define him as a man unqualified to serve in the Oval Office.

Bush said a purported North Korean test of a hydrogen nuclear bomb underscored Trump's challenge, pointing to Trump's inability at a December 14 debate to talk credibly about the three elements of the US nuclear "triad," the arsenal of missiles based in the air, at sea and on land.

"I think when you're asked about the nuclear triad, and you're running for president of the United States, you'd better have a good answer," he said.
© Thomson Reuters 2016