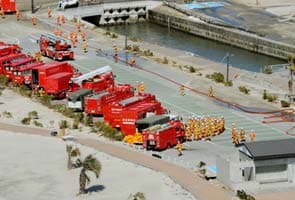 Washington: Japanese engineers battled on Friday to cool spent fuel rods and restore electric power to pumps at the stricken Fukushima Daiichi Nuclear Power Station as new challenges seemed to accumulate by the hour, with steam billowing from one reactor and damage at another apparently making it difficult to lower temperatures.

As the crisis seemed to deepen, Japan's nuclear safety agency raised the assessment of its severity to 5 from 4 on a 7-level international scale retroactive to Tuesday, but it was unclear if the level reflected the current situation at the plant.

Outside experts have said for days that this disaster was worse than that at Three Mile Island -- which was rated a 5 but released far less radiation outside the plant than Fukushima Daiichi already has.

The decision to raise the level came two days after the United States Nuclear Regulatory Commission warned publicly that the situation at the crippled plant was much bleaker than Japanese officials had indicated, either because they were less worried or playing down the scope of the problems for fear of sparking panic.

A senior official at Japan's Nuclear and Industrial Safety Agency said Friday that regulators had not raised the threat level earlier because they were still assessing the situation. But on Friday, they decided events starting at the plant on Tuesday had been worrisome enough to justify the higher rating.

There were two explosions at the plant Tuesday, which appeared to be the first day of significant releases of radiation.

Despite changing the threat level, the Japanese government did not extend the evacuation area from 12 miles. The United States on Tuesday warned its nationals in the area to move at least 50 miles away from the plant.

Prime Minister Naoto Kan spoke to the nation after the announcement on the threat level was made, but he did not address it. Instead, he offered words of encouragement to his countrymen, saying "Japan will overcome this tragedy and will recover."

In a further sign of spreading alarm Friday that uranium in the Japanese plant could begin to melt, Japan planned to import about 150 tons of boron from South Korea and France to mix with water to be sprayed onto damaged reactors, French and South Korean officials said Friday. Boron absorbs neutrons during a nuclear reaction and can be used in an effort to stop a meltdown if the zirconium cladding on uranium fuel rods is compromised.

Tokyo Electric Power Company, which operates the plant, said earlier this week that there was a possibility of "recriticality," in which fission would resume if fuel rods melted and the uranium pellets slumped into a jumble on the floor of a storage pool or reactor core. Spraying pure water on the uranium under these conditions can actually accelerate fission, said Robert Albrecht, a long-time nuclear engineer.

Nuclear reactions at the plant had been halted soon after last week's 9.0 earthquake and tsunami.

In the last two days, Japanese officials have focused their efforts on cooling spent fuel rods in a storage pool in Reactor No. 3, but steam that was probably laden with radioactive particles was also seen on Friday rising from Reactor No. 2. That reactor was one of two hit by an explosion on Tuesday.

Additionally, a senior Western nuclear industry executive said that there also appeared to be damage to the floor or sides of the spent fuel pool at Reactor No. 4, and that this was making it extremely hard to refill the pool with water. The problem was first reported by The Los Angeles Times.

Engineers had said on Thursday that a rip in the stainless steel lining of the pool at Reactor No. 4 and the concrete base underneath it was possible as a result of earthquake damage. The steel gates at either end of the storage pool are also vulnerable to damage during an earthquake and could leak water if they no longer close tightly.

The senior executive, who asked not to be identified because his comments could damage business relationships, said Friday that a leak had not been located but that engineers had concluded that it must exist because water sprayed on the storage pool has been disappearing much more quickly than would be consistent with evaporation.

One concern at No. 4 has been a fire that was burning at its storage pool earlier in the week; American officials are not convinced the fire has gone out. American officials have also worried that the spent-fuel pool at that reactor has run dry, exposing the rods.

The new setbacks emerged as the first readings from American data-collection flights over the plant in north-eastern Japan showed that the worst contamination had not spread beyond the 19-mile range of highest concern established by Japanese authorities.

But another day of frantic efforts on Thursday to cool nuclear fuel in the troubled reactors and in the plant's spent-fuel pools resulted in little or no progress, according to United States government officials. The crisis at the plant seemed increasingly to have produced divergent narratives in Washington and Tokyo, with Japanese officials emphasizing the efforts they were making to tame the damaged plant and American officials highlighting the challenges.

On Friday, water cannons sprayed the stricken Reactor No. 3, live video on the public broadcaster NHK suggested. The footage showed a stream of water aimed at the damaged reactor building, which was rocked by an explosion on Monday, and occasional clouds of steam rising into the air. The Defence Ministry said soldiers of the Japan Self-Defence Force were manning seven trucks that were approaching the No. 3 building one after the other, staying near the reactor for only a short period to minimize soldiers' exposure to radiation.

With a first phase of the operation completed, "the water is likely to have reached the target," said Shigeru Iwasaki, the chief of staff of Japan's Air Self Defence Force. The water cannons were reported to have returned to the plant later in the day. Perhaps because of the difficulties experienced on Thursday trying to accurately drop water from helicopters, the military announced on Friday that it was halting those efforts for at least a day. But the limited flow of information about what is happening continued to provoke international concerns.

After a meeting with Prime Minister Naoto Kan on Friday, Yukiya Amano, the head of the International Atomic Energy Agency, said he would dispatch a team "within days" to monitor radiation near the damaged plant.

At the meeting, Mr. Amano, who had just arrived from the agency's headquarters in Vienna, said Mr. Kan agreed on the necessity to disclose as much information as possible on the unfolding nuclear crisis in Fukushima. "What's important is coordination with international society and better transparency," Mr. Amano told reporters before the meeting.

The data from American flights was collected by the Aerial Measuring System, among the most sophisticated devices rushed to Japan by the Obama administration in an effort to help contain a nuclear crisis that a top American nuclear official said Thursday could go on for weeks.

Strapped onto a plane and a helicopter that the United States flew over the site, with Japanese permission, the equipment took measurements that showed harmful radiation in the immediate vicinity of the plant -- a much heavier dose than the trace levels of radioactive particles that make up the atmospheric plume covering a much wider area.

While the findings were reassuring in the short term, the United States declined to back away from its warning to Americans there to stay at least 50 miles from the plant, setting up a far larger perimeter than the Japanese government had established. American officials did not release specific radiation readings.

American officials said their biggest worry was that a frenetic series of efforts by the Japanese military to get water into four of the plant's six reactors -- showed few signs of working.

"This is something that will likely take some time to work through, possibly weeks, as eventually you remove the majority of the heat from the reactors and then the spent fuel pool," said Gregory Jaczko, the chairman of the United States Nuclear Regulatory Commission, briefing reporters at the White House.

After a day in which American and Japanese officials gave radically different assessments of the danger from the nuclear plant, the two governments tried on Thursday to join forces.

Experts met in Tokyo to compare notes. The United States, with Japanese permission, began to put the intelligence-collection aircraft over the site, in hopes of gaining a view for Washington as well as its allies in Tokyo that did not rely on the announcements of officials from Tokyo Electric, which operates Fukushima Daiichi.

American officials say they suspect that the company has consistently underestimated the risk and moved too slowly to contain the damage.

Aircraft normally used to monitor North Korea's nuclear weapons activities -- a Global Hawk drone and U-2 spy planes -- were flying missions over the reactor, trying to help the Japanese government map out its response to last week's 9.0-magnitude earthquake, the tsunami that followed and now the nuclear disaster.

American officials, meanwhile, remained fixated on the temperature readings inside Reactor No. 2 and two others that had been operating until the earthquake shut them down, as well as at the plant's spent fuel pools, looking for any signs that their high levels of heat were going down. If the fuel rods are uncovered and exposed to air, they heat up and can burst into flame, spewing radioactive elements. So far the officials saw no signs of dropping temperatures. And the Web site of the International Atomic Energy Agency, the United Nations nuclear watchdog, made it clear that there were no readings at all from some critical areas. Part of the American effort, by satellites and aircraft, is to identify the hot spots, something the Japanese have not been able to do in some cases.

Critical to that effort are the "pods" flown into Japan by the Air Force in the past day. Made for quick assessments of radiation emergencies, the Aerial Measuring System is an instrument system that fits on a helicopter or fixed-wing aircraft to sample air and survey the land below.

Getting the Japanese to accept the American detection equipment was a delicate diplomatic manoeuvre, which some Japanese officials originally resisted. But as it became clear that conditions at the plant were spinning out of control, and with Japanese officials admitting they had little hard evidence about whether there was water in the cooling pools or breaches in the reactor containment structures, they began to accept more help.

Promoted
Listen to the latest songs, only on JioSaavn.com
The sensors on the instrument pod are good at mapping radioactive isotopes, like cesium 137, which has been detected around the nuclear complex and has a half-life of 30 years. In high doses, it can cause acute radiation sickness. Lower doses can alter cellular function, leading to an increased risk of cancer.

Cesium 137 can enter the body through many foods, including milk.