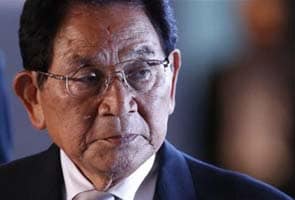 Tokyo: Japanese Prime Minister Yoshihiko Noda is waiting for a doctor's report before deciding the fate of his justice minister who has admitted contacts with members of the Yakuza crime syndicate, a senior official was quoted as saying on Monday.

Keishu Tanaka, 74, checked into a Tokyo hospital on Friday with chest pains, irregular heartbeat and high blood pressure after days of intensifying calls from the opposition for his resignation.

Mr Tanaka, merely three weeks into his job after the latest reshuffle of Mr Noda's cabinet aimed at shoring up his sagging ratings, was responding to a weekly magazine report accusing him of past ties to organised crime.

Mr Tanaka said he acted as a matchmaker at a mobster's wedding and attended a party thrown by the head of a crime group about 30 years ago, explaining that he was not aware of the groom's mob connections or the nature of the event at the time.

The Asahi and Yomiuri dailies said over the weekend that Mr Tanaka's days were numbered and Mr Noda would let him go to minimize the damage.

"Since he is in hospital, I think Mr Noda will handle the matter upon hearing from doctors," Kyodo news agency quoted Democratic Party deputy secretary-general Jun Azumi as saying.

Promoted
Listen to the latest songs, only on JioSaavn.com
The scandal is the latest in a string of setbacks for Mr Noda and his cabinet since he took over in September 2011 as the Democrats' third prime minister in as many years.

A poll by Asahi showed on Monday that support for Mr Noda's government had fallen below the 20 per cent mark for the first time, a bad omen ahead of a general election that Mr Noda promised in August to hold "soon" but has yet to say exactly when.
© Thomson Reuters 2012