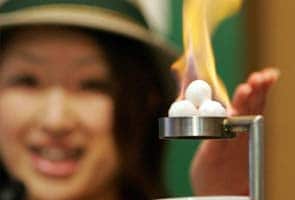 Tokyo: Japan said on Tuesday it had successfully extracted methane hydrate, known as "fire ice", from its seabed, possibly unlocking many years' worth of gas for the resource-starved country.

In what they are claiming as a world first, a consortium is drilling for the hydrate, a fossil fuel that looks like ice but consists of very densely-packed methane surrounded by water molecules, one kilometre (3,300 feet) below sea level.

The solid white substance burns with a pale flame, leaving nothing but water. One cubic metre of it is estimated to contain many times the equivalent volume of methane in gas form.

"It is the world's first offshore experiment producing gas from methane hydrate," the official said, adding that the team successfully collected methane gas extracted from the half-frozen substance.

Under the government-led project, the consortium is to separate methane -- the primary component of natural gas -- from the solid clathrate compound under the seabed using the high pressures available at depth, officials said.

A huge layer of methane hydrate containing 1.1 trillion cubic metres (38.5 trillion cubic feet) in natural gas -- equivalent to Japan's consumption of the gas for 11 years -- is believed to lie in the ocean floor off the coast of Shikoku island, western Japan, the officials said.

"We aim to establish methane hydrate production technologies for practical use by the fiscal 2018 year" ending March 2019, a consortium official said.

"We want to consolidate technologies for its commercialisation," economy, trade and industry minister Toshimitsu Motegi also told a news conference, according to Jiji Press.

"I hope we can make use of resources surrounding our country as soon as possible by clearing hurdles one by one," he added.

The move comes as resource-poor Japan has struck out in search of new energy supplies after it shut down its stable of nuclear reactors in the wake of 2011's tsunami-sparked nuclear crisis.

Japan switched off its atomic reactors for safety checks following the disaster that saw a wall of water hit the Fukushima plant, crippling its cooling systems and sending reactors into meltdown.

Only two of the nation's 50 reactors are now operating, with more stringent safety standards and political nervousness in the wake of the worst nuclear accident since Chernobyl in 1986 keeping the rest out of action.

This has meant energy costs have shot up for Japan as it has been forced to buy pricey fossil-fuel alternatives.

The battle for energy resources in Asia has become a driving force behind many regional disputes.

Talks between Japan and China over a disputed gas field in the East China Sea have been stalled amid the worst diplomatic row between the Asian giants in years.

Promoted
Listen to the latest songs, only on JioSaavn.com
The gas field is northeast of the Tokyo-controlled disputed islands - called Senkaku in Japan and Diaoyu in China - over which Asia's two largest economies have locked horns for months.