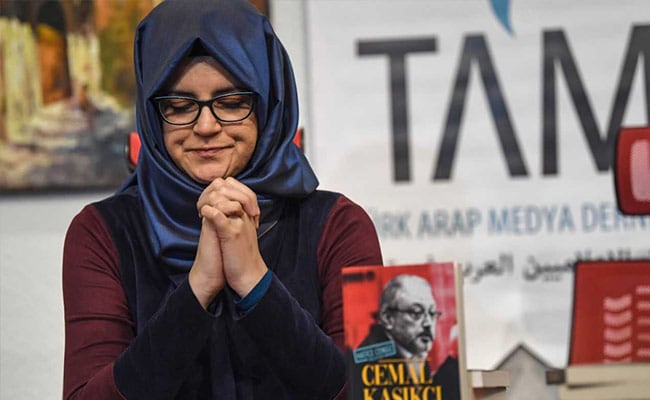 Turkey must keep insisting on justice for slain Riyadh critic Jamal Khashoggi even as ties with Saudi Arabia improve, his Turkish fiancee told AFP in an interview.

The grisly 2018 killing of Khashoggi inside the Saudi consulate in Istanbul worsened already rocky relations between the two Sunni regional powers and rivals, Turkey and Saudi Arabia.

"I think Turkey must somehow continue its insistence (for justice) even if it improves its relations," Hatice Cengiz said after attending another hearing in the case at Istanbul's main court this week.

"I don't think it's in anyone's best interest to shut it down completely."

Cengiz was waiting for Khashoggi outside the consulate as the murder took place.

The 59-year-old was a Saudi insider-turned-critic who wrote for The Washington Post and had gone to the consulate to obtain documents for his wedding to Cengiz.

He was dismembered in the consulate and his remains have never been found.

"In order for such a thing to not happen again, in order for this matter to at least reach the best possible level in moral and legal terms, (Turkey) should not abandon this case," said Cengiz.

She has been living in Istanbul since the pandemic and follows the news closely. Today she keeps a low profile in the media, sending out tweets when reaction is needed to a major development in the case.

In November, she wrote an open letter published by The Post, calling for Justin Bieber to cancel his concert in Saudi Arabia.

The murder had plunged ties between Ankara and Riyadh into a crisis.

President Recep Tayyip Erdogan at the time said the order to kill "came from the highest levels" of the Saudi government though he never named the powerful crown prince.

Yet Turkey has been seeking to repair ties with regional rivals such as Saudi Arabia and the United Arab Emirates over the past two years.

Erdogan said in January he was planning a visit to Riyadh -- which would come at a critical moment for Turkey with inflation surging to a 20-year high of nearly 49 percent.

Asked if she was disappointed, Cengiz said: "If we look at it from the viewpoint of realpolitik, (Turkey's position) did not let me down," adding that countries were "not ruled by emotions" but "mutual interests".

But she added: "Emotionally speaking, of course, I am sad.

"Not because my country has made peace with Saudi Arabia and that this issue is closing, but ultimately, no matter how fiercely we defended it, on a national basis, on a state basis, on a president basis ... now everything is starting to go back to the way it was, as if nothing had happened. I am inevitably disappointed about this."

An Istanbul court put 26 Saudis on trial in absentia -- including two close to the crown prince, but no progress has been made for almost two years.

Cengiz said the legal process was stalled due to Saudi Arabia's failure to cooperate because "they preferred to stay away from the issue completely instead of cooperating".

'Where Is His Body?

Saudi Arabia has always insisted that its legal process, carried out behind closed doors, has been completed and there is no need for further arrests.

A Saudi court in 2020 jailed eight people for between seven and 20 years over the killing.

"As his close one, I have the right to ask this question: I've been asking since day one. Where is his body?" Cengiz said.

"As a Muslim, knowing where it is, laying a tombstone even if it is a symbolic one, I think that's the way it should be."

But she hoped the thaw in Turkish-Saudi ties would help shed light on the gruesome murder.

"I think there is always something that can be done, even if relationships get back on track," she said.

"Turkey should continue to ask for information that will contribute positively to the lawsuit process it has opened, even after the relations are improved."

She refuses to give up.

"I did not raise my voice just because state-to-state relations have deteriorated, so that I will not stop speaking up when countries return to normal relations again because what I do is a struggle for rights, a search for justice."

Despite the pessimism, she remains hopeful.

"It is a heartbreaking situation. For the first time in the recent history, especially in the modern period, humanity is witnessing such a thing," she said.

"It is very upsetting for me that such a grave murder is moving towards a lack of a conclusion, but I am hopeful. Even if the mechanisms are insufficient... I think that justice will be served."