"It's Our Lives On The Line": Young Activists Tell UN Climate Talks

A week of government speeches and pledges at the two-week gathering has included promises to phase out coal, slash emissions of the potent greenhouse gas methane and reduce deforestation. 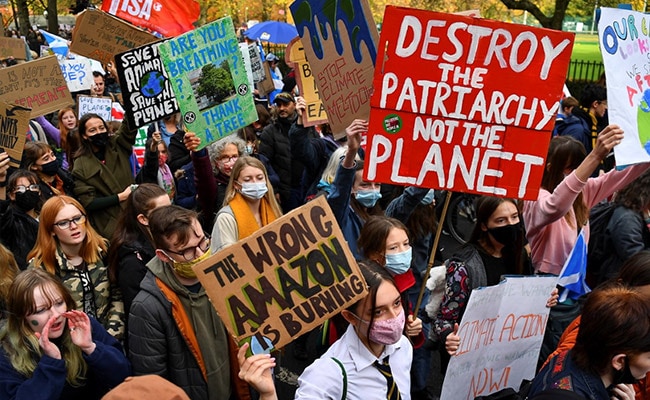 Greta Thunberg said leaders of the global north appeared to be fighting to prevent real change.

Thousands of young campaigners marched through the streets of Glasgow on Friday, demanding urgent action from world leaders at the UN climate conference to stave off catastrophic climate change.

A week of government speeches and pledges at the two-week gathering has included promises to phase out coal, slash emissions of the potent greenhouse gas methane and reduce deforestation.

But campaigners and pressure groups have been underwhelmed by the commitments made so far, many of which are voluntary, exclude the biggest polluters, or set deadlines decades away.

"We are in a disaster that is happening every day," activist Vanessa Nakate said of life in her home country Uganda, which has one of the fastest changing climates in the world. "We cannot keep quiet about climate injustice."

Some of the marchers and community leaders who addressed the crowd demanded deep-rooted change to the status quo.

"This is a message from indigenous women in the Amazon to keep oil in the ground, to stop mining. That is good for all of us, for indigenous people and for the world," one speaker said.

"They are actively creating loopholes and shaping frameworks to benefit themselves and to continue profiting from this destruction," she said. "We need immediate annual drastic annual emission cuts unlike anything the world has ever seen."

Sixteen-year-old protester Hannah McInnes said climate change was the most universally devastating problem: "It's our lives and our futures that are on the line."

Inside the COP26 conference venue in the Scottish city, civil society leaders took over discussions.

"We must not declare victory here," said former U.S. Vice President Al Gore, who shared the 2007 Nobel Peace Prize for his work informing the world about climate change. "We know that we have made progress, but we are far from the goals that we need to reach."

The talks aim to secure enough national promises to cut greenhouse gas emissions - mainly from fossil fuels - to keep the rise in the average global temperature to 1.5 degrees Celsius.

Scientists say this is the point at which the already intense storms, heatwaves, droughts and floods that the Earth is experiencing could become catastrophic and irreversible.

To that end, the United Nations wants countries to halve their emissions from 1990 levels by 2030, on their way to net-zero emissions by 2050. That would mean the world would release no more climate-warming gases than the amount it is simultaneously recapturing from the atmosphere.

The summit on Thursday saw 23 additional countries pledge to try to phase out coal - albeit over the next three decades, and without the world's biggest consumer, China.

A pledge to reduce deforestation brought a hasty about-turn from Indonesia, home to vast and endangered tropical forests.

But a plan to curb emissions of methane by 30% did appear to strike a blow against greenhouse gases that should produce rapid results.

And city mayors have been https://www.reuters.com/business/cop/nations-talk-climate-cities-say-we-deliver-2021-11-04 working out what they can do to advance climate action more quickly and nimbly than governments.

The Glasgow talks also have showcased a jumble of financial pledges, buoying hopes that national commitments to bring down emissions can actually be implemented.

But COP26 President Alok Sharma warned time was running short, with too many issues still unresolved.

Efforts to set a global pricing framework for carbon, as a way to make polluters pay fairly for their emissions and ideally finance efforts to offset them, are likely to continue to the very end of the two-week conference.

U.S. climate envoy John Kerry said a deal at the summit could be reached to settle the final details of the rulebook for how to interpret the 2015 Paris Agreement.

The United States favoured "the most frequent possible" assessments of whether countries were meeting their goals to reduce emissions, he said.

But President Joe Biden's mammoth "Build Back Better" package, including $555 billion of measures aimed at hitting the 2030 target and adapting to climate change ran into snags on Friday as the House of Representatives was due to vote on it.

The placards and chants of the crowd in Glasgow suggested people's patience was running out.

"The Earth's climate is changing!" a schoolchild's sign read, under a hand-painted picture of a globe on fire. "Why aren't we?"