Coronavirus Update: Benjamin Netanyahu, at a press conference after a review meeting to fight the spread of coronavirus, said that several measures will be announced to prevent the spread of the disease. 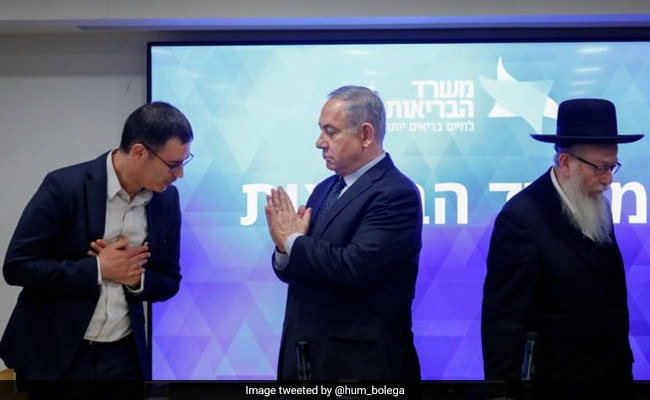 Coronavirus: Benjamin Netanyahu also demonstrated how Indians greet each other with "Namaste"

"Just avoid shaking hands as I do. You can try to implement the Indian system of Namaste or say another word like shalom, but find a way, any way of not shaking hands," Mr Netanyahu said. Benjamin Netanyahu also demonstrated how Indians greet each other with "Namaste".

The novel coronavirus spreads through contact with droplets spread during coughing and sneezing, doctors say. Besides keeping contact to a minimum with an infected person, the preventive measures include frequent washing of hands and use of hand sanitisers.

Benjamin Netanyahu's familiarity with Indian customs and traditions are not surprising. Mr Netanyahu is known to be close to Prime Minister Narendra Modi with their bonhomie being widely discussed in Indian and Israeli media. Mr Netanyahu visited India in January 2018 while PM Modi travelled to Tel Aviv in 2017. The leaders had received each other at the airports.

Mr Netanyahu, at a press conference after a review meeting to fight the spread of coronavirus, said that several measures will be announced to prevent the spread of the disease.

"We have had to take rigorous steps to slow the spread of the disease in Israel, we have taken select isolation and flight policies and measures for flights," he said, reports news agency PTI.

Israel has 15 confirmed cases of the deadly virus but no deaths, with some 7,000 others in home-quarantine. Public gatherings of more than 5,000 people have been banned in Israel and asked people to refrain from going abroad.

Over 3,000 people have died globally due to the deadly virus that does not have a cure yet. Over 90,000 people have been infected worldwide with 28 reported cases in India. The virus that originated in China's Wuhan in December last year has spread to over 60 countries.