Israel Recaptures Four Of Six Palestinians Who Fleed From Jail

Since Monday's jail break from Gilboa prison in northern Israel, the army has poured troops into the occupied West Bank for a massive manhunt. 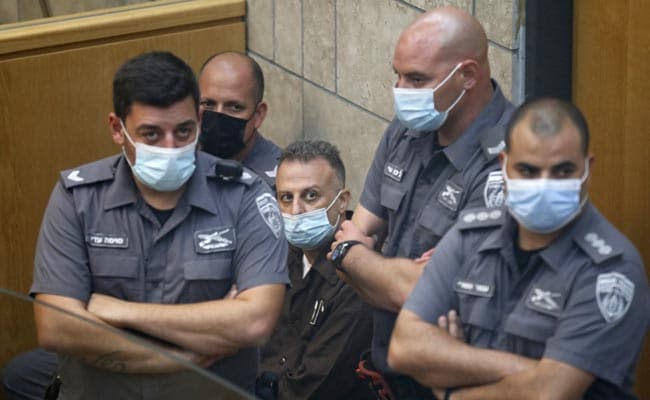 Israel has recaptured four of the six Palestinian militants who escaped from a high-security prison earlier this week in one of the most daring breakouts in the country's history, police said Saturday.

Since Monday's jail break from Gilboa prison in northern Israel, the army has poured troops into the occupied West Bank for a massive manhunt.

The latest two fugitives to be recaptured, who include a prominent former militant leader, were found hiding in a lorry park just outside Nazareth in northern Israel, police said.

Zakaria Zubeidi, 46, headed the armed wing of the Fatah movement of Palestinian president Mahmud Abbas in the West Bank town of Jenin.

Mohammad Ardah, 39, was sentenced to life in prison in 2002 for his role in Islamic Jihad's armed wing.

Police said they were "hiding in a parking lot for trucks".

"The hunt for the other two fugitives continues."

On Friday evening, police recaptured Islamic Jihad members Yaqub Qadri, 48, and Mahmud Abdullah Ardah, 45. The latter was the alleged mastermind of the escape.

"Police located (the two fugitives) and chased them in a helicopter," the police statement said.

"They offered no resistance when they were arrested in the south of Nazareth."

Israeli Prime Minister Naftali Bennett praised the "determined and persistent" operation that led to the recapture of the four convicts.

"The high alert must continue until the recapture of the two remaining prisoners," he added, referring to Islamic Jihad members Ayham Kamamji, 35, and Munadel Infeiat, 26.

Shortly after their recapture was announced Friday, the army said that a rocket had been fired at southern Israel from the Gaza Strip, but was intercepted by air defences.

A second rocket from Gaza was fired towards southern Israel on Saturday night, but was also intercepted by air defences, the army said.

Israeli police and troops had conducted a huge search operation for the six prisoners since they escaped through a tunnel dug beneath a sink in a cell.

The army closed all the checkpoints connecting Israel and annexed east Jerusalem with the West Bank to prevent them from entering Palestinian population centres.

The six fugitives were all members of Palestinian militant groups who were convicted by Israeli courts of plotting or carrying out attacks against Israelis.

Mahmud Ardah, from Arraba near Jenin, was imprisoned in 1996 for attacks on Israel claimed by Islamic Jihad and was among four to receive a life sentence.

He was held in solitary confinement in 2014 after an escape tunnel was found at Israel's Shata prison, according to his Islamic Jihad biography.

One of his brothers, Mohammed, told AFP the family was saddened by his recapture but "happy he was free" for a few days.

"Our fear now is that he will be tortured, placed in solitary confinement or barred from receiving visitors or making phone calls," he said.

Israel's Public Security Minister Omer Bar-Lev said on television Saturday that at least one of the two prisoners still on the run had probably made his way into Palestinian territory.

A statement from Islamic Jihad said the arrests would not erase the fact of their "heroic" escape.

Any attempt by the Israeli authorities to "take revenge" on the prisoners would be interpreted as a "declaration of war", it added.

The Islamist movement Hamas that runs Gaza hailed the "heroes" of the "tunnel of freedom".

Hamas's armed wing meanwhile warned in a statement that any future prisoner exchange with Israel "will be linked to the liberation of these heroes".

Since Israel's 2014 invasion of Gaza, the Islamist group has held the bodies of Israeli soldiers Oron Shaul and Hadar Goldin, although Hamas has never confirmed their deaths.

Hamas is also believed to be holding two Israeli citizens who entered Gaza alone and whose families say they have mental health issues.

Israel is meanwhile holding more than 5,000 Palestinians in its jails.

When news of the escape first broke on Monday, many people in Gaza and in Jenin took to the streets to celebrate.