"Islamic State Trying To Regroup In Afghanistan": Top US General

The US General made the remarks during a Senate hearing in the presence of Secretary of Defence Lloyd Austin. 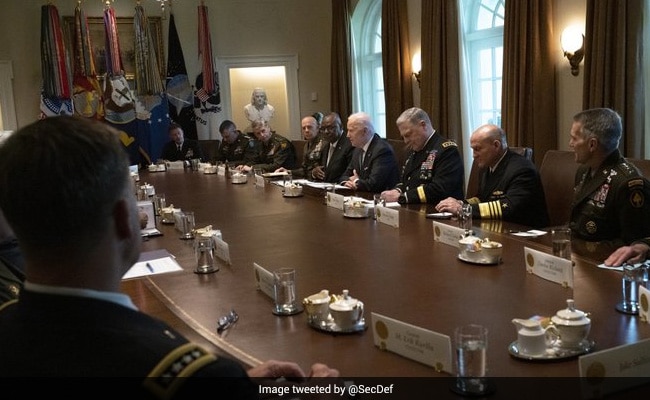 A series of deadly blasts, claimed by IS, have have hit Afghanistan in the past few weeks.

Chairman of the US Joint Chiefs of Staff General Mark Milley on Tuesday said that the Islamic State (ISIS) and other terrorist groups are trying to regroup in Afghanistan, highlighting that although the groups are far from the US mainland, they still present a threat.

The US General made the remarks during a Senate hearing in the presence of Secretary of Defence Lloyd Austin.

"ISIS and other groups are trying to put themselves back together, they have not succeeded yet and they have not yet presented a threat to the US homeland but we are watching that very, very, closely and if they raise their head and do present a threat, we will take appropriate (action)," Milley said as quoted by Tolo News.

The Taliban regime in Afghanistan, however, denied that ISIS, whose Afghanistan branch is called Islamic State-Khorasan (ISIS-K), has been having an expanding presence in the country.

"We have eliminated a lot of their sanctuaries so far. The presence of Daesh (ISIS-K) is very small. They have conducted some attacks on a school and mosques but have not accomplished anything significant. We are serious about our security and will not allow anyone to cause insecurity," Islamic Emirate's Spokesperson Zabihullah Mujahid said.

Earlier, US Central Command (CENTCOM) chief General Kenneth McKenzie had said in March that ISIS-K continues to grow unabated in Afghanistan with the reigning Taliban regime finding it difficult to counter the threat.

"We assess probably a couple thousand, more or less, ISIS fighters in Afghanistan. Of course, when the Taliban opened Pul-e-Charkhi and Parwan prisons, it infused new talent and new energy into ISIS, so they're now reaping the result of that very short-sighted decision," McKenzie said during a press briefing as quoted by Sputnik News Agency.

In the past few weeks, a series of deadly blasts, many of them claimed by the ISIS-K and targetting minorities have hit Afghanistan, with the latest major blast targeted at a mosque last Friday in Kabul killing at least 30 people and injuring many others.

The series of blasts and vulnerable security conditions, especially for the minorities has drawn worldwide condemnation, including from the United Nations (UN), the EU, US and others.