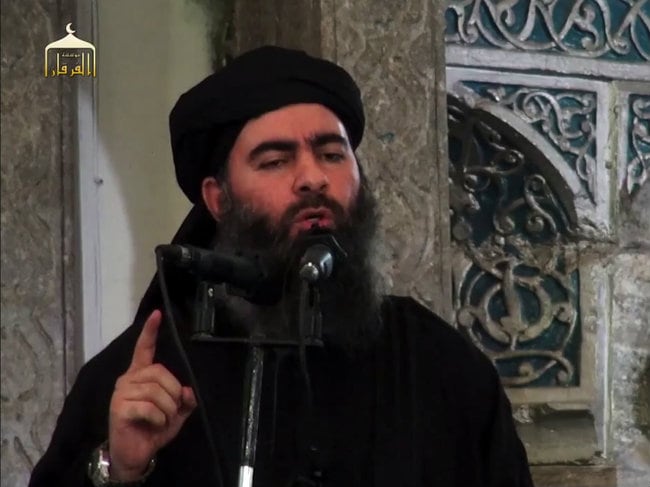 Beirut: Islamic State issued an audio recording on Thursday that it said was by its leader Abu Bakr al-Baghdadi, calling on supporters around the world to join the fight in Syria and Iraq or to take up arms wherever they live.

It was Baghdadi's first message since a number of media reports said he was wounded this year in Iraq. Some said he was no longer running the group and others suggested he had even died.

In the recording, issued by the group's al-Furqan media outlet and posted on several websites, a voice sounding like Baghdadi's says: "There is no excuse for any Muslim not to migrate to the Islamic State ... Joining (its fight) is a duty on every Muslim. We are calling on you either join or carry weapons (to fight) wherever you are."

Reuters could not independently verify the authenticity of the audio or its date.

In the message, Baghdadi tells the rulers of Saudi Arabia, who he considers his enemies, that "their end is near", adding that Gulf rulers felt threatened by the growing popularity of his group among Sunni Muslims.

"They have lost their so-called legitimacy ... When they felt that their masters, the Crusaders and the Jews, have replaced them with the Rafeda they launched their so-called war against Rafeda in Yemen," he said, using a derogatory term for Shi'ite Muslims.

"They claim that they are defending the Sunnis ... They are lying. It is a desperate attempt to deter Muslims from joining the Islamic State ... (because) it is defending them and this terrifies the sons of Saloul," he said using a derogatory term to describe the rulers of Saudi Arabia.

Islamic State considers all those who oppose it to be infidels.

The group has faced military setbacks in Iraq when Iraqi forces including Shi'ite paramilitaries retook the city of Tikrit in the first big counter-offensive since Islamic State rapidly seized swathes of territory last year.

But the militants have struck back at the oil-producing town of Baiji and in the western province of Anbar where its move on the provincial capital of Ramadi displaced thousands of people.

Baghdadi called on those who left Ramadi to return, saying: "You are our people, we will defend you ... We want your safety and security."

With the United States conducting air strikes against Islamic State positions, reports have circulated that Baghdadi had been seriously wounded and had handed leadership over to a deputy.

Baghdadi has issued several audio message since he declared the Islamic State but appeared in only one video right after his group seized the Iraqi city of Mosul last year. He was filmed giving a sermon in one of the city's mosques with several of his commanders sitting in the front row.

But fighters from his group told Reuters they frequently saw him in battlefields, leading the fight or checking on his soldiers. He was wounded in a battle in Syria last year.

At the end of his message Baghdadi saluted Islamic State loyalists in several countries including Egypt.

"You soldiers of the Islamic State stay steadfast ... Your enemy (the Shi'ite) is drained and today it is weaker than yesterday. It is also becoming weaker and weaker and you are becoming strong."
© Thomson Reuters 2015
Comments
Abu Bakr al-BaghdadiISIslamic StateIslamic State audio