Cairo: A Russian charter plane carrying 224 people crashed in a mountainous part of Egypt's Sinai Peninsula Saturday, killing everyone on board, officials said.

The Islamic State (ISIS) group affiliate in Egypt claimed it downed the plane, without saying how, but an Egyptian security official said the plane did not crash because of an attack.

Russian Transport Minister Maksim Sokolov said the ISIS claim "cannot be considered accurate", adding that authorities in Egypt "have no such information that would confirm such insinuations," Russian news agencies reported.

The Airbus A321 with 214 Russian and three Ukranian passengers and seven crew, had taken off from the Red Sea resort of Sharm el-Sheikh in south Sinai bound for Saint Petersburg.

Egyptian security and medical officials said there were no survivors, and that bodies and debris were spread over around five square kilometres.

The Russian embassy in Cairo said: "Unfortunately, all passengers of Kogalymavia flight 9268 Sharm el-Sheikh-Saint Petersburg have died. We issue condolences to family and friends."

The ISIS affiliate waging an insurgency in the Sinai claimed that "the soldiers of the caliphate succeeded in bringing down a Russian plane".

It said this was in revenge for Russian air strikes against ISIS in Syria.

Three military experts said ISIS in Sinai does not have surface-to-air missiles capable of hitting a plane at high altitude. 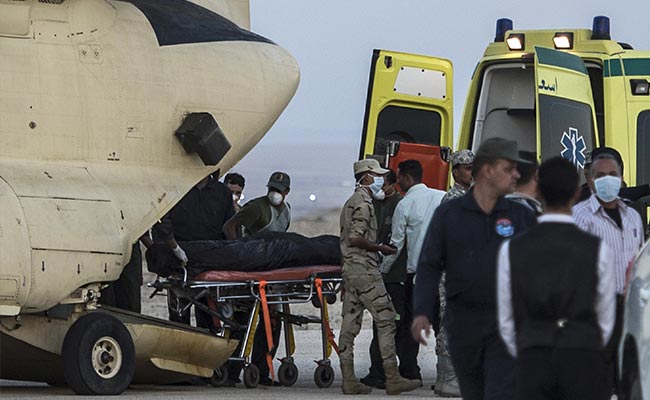 Paramedics load the bodies of the victims at Kabret air base. Reports suggest Lufthansa and Air France have decided to avoid flying over the Sinai Peninsula until they get a clear explanation about the crash. (AFP photo)

Rescue teams
But they could not exclude the possibility of a bomb on board or a surface-to-air missile strike if the aircraft had descended for an emergency landing.

Russia's emergency ministry published a list of names of the passengers, ranging in age from a 10-month-old girl to a 77-year-old woman.

A senior Egyptian aviation official said the charter flight was flying at 30,000 feet when communication was lost.

"I am meeting my parents," said 25-year-old Ella Smirnova. "I spoke to them last on the phone when they were already on the plane, and then I heard the news."

"I will keep hoping until the end that they are alive, but perhaps I will never see them again," she said.

A senior Egyptian air traffic control official said the pilot told him in their last communication that he had radio trouble.

He said it did not make contact as expected with Cyprus air traffic control.

"Communication was lost today with the Airbus 321 of Kogalymavia which was carrying out flight 9268 from Sharm el-Sheikh to Saint Petersburg," Mr Izvolsky told Russian television networks. 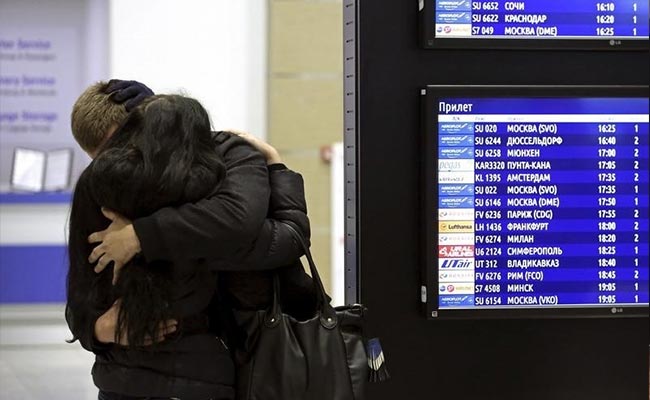 One of two flight recorders, key to any investigation, was quickly found, but wreckage was scattered over a wide area. Officials say 120 bodies have been found intact. (Reuters photo)

Safety record
"The plane departed Sharm el-Sheikh with 217 passengers and seven crew members. At 7:14 Moscow time the crew was scheduled to make contact with... Larnaca (Cyprus). However, this did not happen and the plane disappeared from the radar screens."

Kogalymavia, which operates under the name Metrojet, says it has two A320s and seven A321s, and that it carried 779,626 passengers in the first nine months of 2015, according to the Russian aviation agency Rosaviatsia.

Russia has a dismal air safety record, with charter operators often under pressure to book to capacity on ageing jets in an attempt to cut costs.

No representative of the airline could be found at the airport in Saint Petersburg and calls to company phones went unanswered.

Russia's regional carriers are notorious, and the crash is likely to raise renewed concerns about the safety of air travel in a country with an ageing fleet of airliners.

The last major air crash in Egypt was in 2004, when a Flash Airlines Boeing 737 plunged into the Red Sea after taking off from Sharm el-Sheikh.

All 148 people on board, most of whom were French, died.

Millions of tourists, many of them Russian, visit the resort, one of Egypt's major attractions for its pristine beaches and scuba diving.

It and other resorts dotting the Red Sea coast are heavily secured by the military and police, as an Islamist militant insurgency rages in north Sinai bordering Israel and the Gaza Strip.