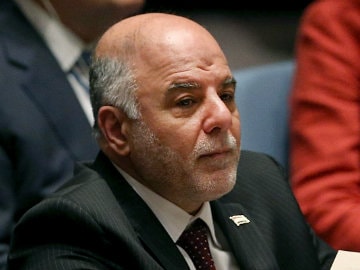 Baghdad: Iraqi Prime Minister Haidar al-Abadi is to visit Iran on Monday for talks on Baghdad's battle against the Islamic State group, which holds swathes of the country, his office said.

The one-day trip is part of Mr Abadi's bid "to unite the efforts of the region and the world to help Iraq in its war against the terrorist group," it said in a statement issued on Sunday.

The visit also aims to strengthen cooperation between the two neighbours "in the fields of energy, and housing and construction," among other areas.

Iraq is fighting to push back IS, which overran much of the country's Sunni Arab heartland in a lightning offensive in June.

Tehran is a key backer of the Shiite-led government in Baghdad.

According to senior Iraqi Kurdish officials, it has deployed troops on the Iraqi side of the border in the Khanaqin area northeast of Baghdad.

They say Iranian forces also played a role in the Shiite Turkmen town of Amerli, where security forces and allied militiamen broke a months-long jihadist siege at the end of August.

Evidence also indicates that Iran sent Sukhoi Su-25 ground attack jets to Iraq, though it is unclear who subsequently piloted the aircraft.

A US-led coalition is carrying out air strikes against IS in Iraq and neighbouring Syria, where the jihadists also hold major territory.

Promoted
Listen to the latest songs, only on JioSaavn.com
Washington and its allies have also sent military advisers to assist Baghdad's forces.

Mr Abadi has repeatedly stated that he opposes the presence of foreign ground forces in Iraq.