Iraq bombings kill 13 ahead of vote 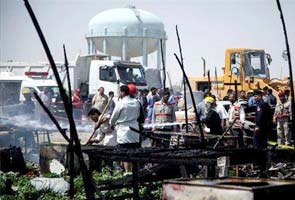 Mosul, Iraq: A suicide bombing in northern Iraq killed a provincial political party leader and four relatives on Wednesday, officials said, ahead of elections in which his bloc was to participate.

Bombings also killed eight youths near a football pitch in a town northeast of Baghdad.

Yunus al-Ramah, head of the United Iraq party, had been hosting a social event at his home in Al-Hadhr, in Nineveh province, when a suicide bomber targeted people gathering in his garden, said police First Lieutenant Islam al-Juburi.

Ramah and four relatives were killed and six others wounded, Juburi and a doctor said.

United Iraq is seen as allied to Prime Minister Nuri al-Maliki, and while Ramah was not standing in Thursday's election, several party members are.

Northeast of the capital, in restive Diyala province, back-to-back roadside bombs near a popular football pitch in Muqdadiyah killed eight youths, a police colonel and a doctor said.

Another 25 people were wounded in the evening attack.

The attack on Ramah came ahead of Thursday's elections in Nineveh and Anbar, two Sunni-majority provinces where polls had been delayed by officials over security concerns.

No group immediately claimed responsibility for the attack, but Sunni militants linked to Al-Qaeda have sought to intimidate candidates, particularly in a bid to derail elections in majority-Sunni areas of Iraq.

Nineveh is one of Iraq's most violent provinces, per capita, according to British NGO Iraq Body Count.

Iraq has suffered a heightened level of unrest since the beginning, coinciding with rising discontent among the Sunni Arab minority that erupted into protests in late December.

Promoted
Listen to the latest songs, only on JioSaavn.com
Analysts say a lack of effort by the Shiite-led authorities to address the underlying causes of the demonstrations has given militant groups fuel and room to manoeuvre to carry out their activities.

Political leaders have pledged to resolve outstanding disputes, and Prime Minister Maliki has met with two of his main rivals in a bid to ease tensions, but no tangible moves have been agreed.