Iran President Urges Next US Administration To "Learn" From Sanctions

Rouhani said "three-year experience will be a lesson for America's next administration to abide by laws and regulations and return to its commitments. 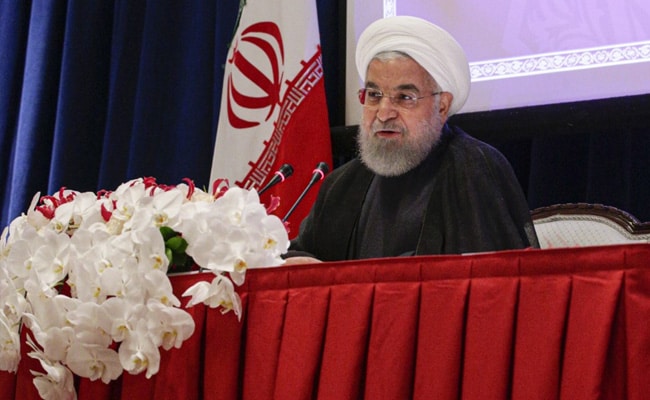 Rouhani said "Our people have faced economic terrorism for the past three years."

Iran's President Hassan Rouhani said Saturday he hoped the next US administration will have learnt that sanctions cannot make Tehran bow to American policy.

US President Donald Trump, who appears to be on the verge of having lost Tuesday's election to challenger Joe Biden, has applied a "maximum pressure" policy and punishing sanctions against Iran since his 2018 withdrawal from a landmark nuclear agreement with Iran.

"We hope the three-year experience will be a lesson for America's next administration to abide by laws and regulations and return to its commitments," Rouhani said in a televised speech.

"Our people have faced economic terrorism for the past three years."

Rouhani said Iran would "continue its resistance and patience until the other side bows before laws and regulations".

The Islamic republic hoped that "those imposing sanctions realise their path was wrong and that they will not achieve their goals in any way".

Iranian officials have said they will focus on the policies of the next US administration rather than who becomes president.

Tehran has also stressed that a possible US return to the nuclear agreement would have to be accompanied by compensation for damages caused by the withdrawal and a "guarantee" it will not be repeated.

Iran's supreme leader Ayatollah Ali Khamenei said Tuesday that the US election would have "no effect" on Tehran's policies towards Washington.

Biden has said he plans to embark on a "credible path to return to diplomacy" with Iran if he wins the presidency and raised the possibility of returning to the 2015 nuclear deal, negotiated when he was vice president under Barack Obama.

The policy of "maximum pressure has reached its end, and contrary to Trump's expectations, Iran has not crumbled", government spokesman Ali Rabiei wrote Saturday in the state daily Iran.

"Whatever administration comes to power ... (it) has no (more) sanctions left to impose," he said.

Rabiei called on the next US president to "attempt to dismantle the structure which Trump created" and return to a "reasonable policy".

Most of Iran's daily newspapers covered the US presidential election on their Saturday front pages.

"Spectacular America!" mocked the ultraconservative Kayhan, saying "the country which calls itself the global role model of democracy has entered a period of political, security and social instability".

Aftab-e Yazd, a reformist paper, however, predicted "less surprises in foreign policy and things will be more predictable" without Trump.

"Of course, being predictable does not equal being positive," it added.