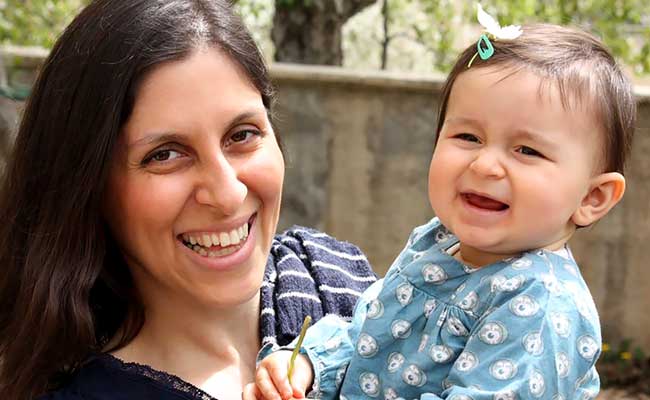 Nazanin Zaghari-Ratcliffe poses for a photograph with her daughter Gabriella. (AFP Photo)

Tehran: A British-Iranian woman who was arrested in Iran in April was accused today of seeking to "overthrow the regime", according to a statement from the powerful Revolutionary Guards.

Nazanin Zaghari-Ratcliffe, an employee of the Thomson Reuters Foundation, was accused of being "involved in the soft overthrow of the Islamic republic through... her membership in foreign companies and institutions," the Mizan news agency quoted a regional Guards branch as saying.

Zaghari-Ratcliffe, 37, was arrested at Tehran airport on April 3 as she prepared to return to Britain with her daughter after visiting family in Iran, her husband said.

Iran doesn't recognise dual-citizenship and, if put on trial, she will be considered an Iranian.

According to the Guards, Zaghari-Ratcliffe was "identified and arrested after massive intelligence operations" as one of "the heads of foreign-linked hostile networks."

She was alleged to have conducted "various missions... leading her criminal activities under the direction of media and intelligence services of foreign governments."

"Further investigations are being done and her case has been sent to Tehran for legal proceedings," the statement added.

Zaghari-Ratcliffe is being held in a furnished room in a prison in the southeastern city of Kerman, it added.

Her husband said she was held in solitary confinement for 45 days.

Britain's Foreign Office has said it has raised the case "repeatedly and at the highest levels" and will continue to do so at "every available opportunity".