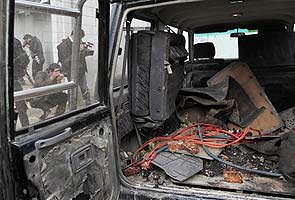 Explosive are seen in the back of a vehicle used by an insurgent at the site where he was shot to death in Kabul, Afghanistan on Sunday

Kabul, Afghanistan: A series of early morning attacks hit eastern Afghanistan on Sunday, with three separate suicide bombings in outlying provinces and a shootout between security forces and a would-be attacker in the capital city of Kabul.

The deadliest attack was a suicide car bombing at a state intelligence site just after sunrise in the eastern city of Jalalabad. In that attack, a car approached the gate of a compound used by the National Directorate of Security and exploded, killing two guards and wounding three others, said regional government spokesman Ahmad Zia Abdulzai. The building was damaged in the attack, he added.

Shortly before the Jalalabad attack, an assailant detonated a van packed with explosives at a highway police checkpoint in Logar province, also in the east. That explosion wounded three police officers but no one was killed, said Deputy Police Chief Rais Khan Abdul Rahimzai.

In Kabul, meanwhile, police shot and killed a would-be suicide bomber who was trying to attack an intelligence agency office downtown, according to the city's deputy police chief, Gen. Mohammad Daud Amin. Intelligence agents spotted the bomber before he could detonate the explosives in his vehicle and shot him, Amin said.

The explosives in the vehicle were later defused, he added.

Later in the morning, a man wearing a suicide vest blew himself up outside the police headquarters for Baraki Barak district in Logar province. The man was stopped by police as he tried to force his way into the building, but still managed to detonate his vest, said Din Mohammad Darwesh, the provincial government spokesman.

Promoted
Listen to the latest songs, only on JioSaavn.com
One policeman was wounded in the Baraki Barak attack, Darwesh said.