Inside The Brutal But Bizarrely Bureaucratic World Of ISIS In Libya 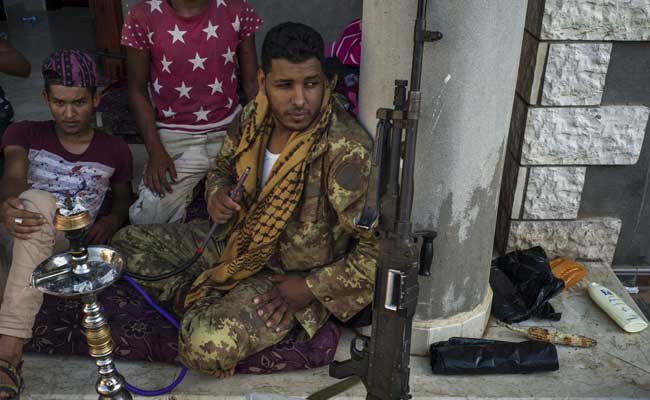 Pro-government fighters take a break before returning to the frontline against the ISIS in Sirte.

SIRTE: When the Islamic State's religious police arrived at his door, Ahmood Abu Amood feared he would never see his family again.

The two militants drove up in a beige sport-utility vehicle, Amood said, the kind used to transport anyone who broke the rules to an office to pay a fine, to get a whipping - or to jail.

But the men didn't come to arrest him that cool February evening. They offered him a job.

They told Amood, who had been a traffic police officer in the city before the group seized it last year, that they were launching a new traffic police department, and they wanted him to be its head. It would evolve, they said, into a Department of Motor Vehicles.

"They wanted to eventually issue driver's licenses to all the people who live inside the Islamic State," Amood said.

Even as they ruled through fear and brutality, as their counterparts have in Syria and Iraq, Islamic State officials in Libya aspired to create a government with a functioning bureaucracy, public services and a credible judicial system.

Residents in the fractured coastal city of Sirte described the militants' ambitions in interviews last week, offering a portrait of the group's efforts to extend its self-proclaimed caliphate into Libya. With its defenses crumbling in Iraq and Syria, the Islamic State increasingly saw Sirte as a possible substitute capital, especially if its Syrian haven of Raqqa fell.

That goal now appears distant as pro-government militias, backed by the United States and other allies, have captured key positions that were held by the Islamic State, also known as ISIS or ISIL, and are pursuing hundreds of militants remaining in Sirte.

But what unfolded in Sirte opens a window into the group's still-bubbling aspirations in North Africa. It also illuminates its vision of a nation run by a harsh interpretation of ancient Islamic codes and a carrot-and-stick approach to ruling the populations under its control.

"If you accepted living under their way of life, you were not touched," said Mohamed Ziyani, 27, who runs his family's furniture shop. "They were definitely trying to create a state."

Sirte held symbolic and strategic value for the Islamic State. It is Libyan dictator Moammar Gadhafi's birthplace. And it was where he was killed during the revolutions that swept through Libya and the Arab world five years ago. The city is in the nation's lucrative petroleum crescent, the center of much of Libya's oil and gas reserves.

The Islamic State affiliate emerged after the uprising, exploiting Libya's instability and tribal rivalries to become the group's strongest branch outside the Middle East. In early 2015, Islamic State fighters entered Sirte, gaining support from jihadist networks and tribal leaders who had been loyal to Gadhafi but felt disenfranchised after his death.

By the summer, the Islamic State was in control of the city.

Men were forced to grow beards. They had to roll up their pants legs a few inches above the ankles, especially when praying, in accordance with sayings of the prophet Muhammad. Women were told to wear black niqabs or veils that covered their faces and eyes, forcing them to see through a filmy gauze. And their abayas, the head-to-toe garments worn by conservative Muslim women, had to be made from nontransparent material. Religious police, prevalent in every neighborhood of the city, enforced the new rules.

Residents were ordered to attend mosques five times a day, and stores and businesses were required to close during prayers. Satellite TV dishes were taken down to prevent residents from watching Western and other "immoral" programming. Cigarettes and alcohol were confiscated and destroyed.

At first, the militants made examples out of people who violated the decrees.

"They killed anyone caught drinking or taking drugs right away," said Rawad bin Sawood, 27, a tire shop owner. "They stopped terrorizing people only after they set up the court system and judges. Proper procedures were then established."

The limbs of thieves were amputated, and adulterers were stoned to death in the main square. Fortunetellers and sellers of charms to ward off evil spirits were branded "sorcerers" and beheaded publicly. So were Sufi Muslims, considered heretics by the Islamic State.

Many of the executions took place at a roundabout in the Zafran enclave. Pedestrians were stopped and drivers ordered to pull over to witness the brutality.

The first person executed there was a man named Ahmed Abu Zumita, who was accused of spying on the Islamic State. His arms and legs were strapped to a black metal frame about 20 feet tall. His executioner placed a cardboard tag around his neck with the phrase "Fajr 166" on it, a reference to a Misuratan militia that tried and failed to retake the city last year.

"Then, they shot bullets into his head," recalled Amood, who said he witnessed the killing with 200 others.

Zumita's body was displayed for the next three days as a warning to residents.

Others were killed silently.

At a makeshift prison inside a large house painted lavender, "Long Live the Islamic State" is scrawled on a wall about "You infidels." In one corner of the compound, near a brick wall, pro-government fighters unearthed a grave last month that contained nine bodies. Many had been shot in the head.

Tariq Zarga would have been the 10th victim there.

He was jailed for sending text messages praising the pro-government militias. "They beat me with a whip and then gave me electric shocks," recalled Tariq, the scars still visible on his body. "They kept telling me, 'You are not a true Muslim.' "

He was sentenced to death without a trial.

His brothers, Mustafa and Mosbah, were accused of the same crime and were handed over to a court. But because they had erased their messages, the judge ruled that there was insufficient evidence.

"When they found nothing against us, they told us to leave," Mustafa Zarga said.

The day Tariq Zarga was scheduled to be executed, pro-government fighters entered the enclave and liberated him.

The militants, however, carefully picked whom they would target. They sensed that they needed experienced local help to create a state.

Rather than executing local officials, bureaucrats and police officers, as they publicly have in Syria and Iraq, commanders demanded that they repent in the main mosque for working for the government - and embrace the Islamic State's teachings.

And while the militants have reportedly sexually assaulted foreign women in Libya, they didn't force girls and single or widowed women in Sirte to marry their fighters, nor did they hold them as sex slaves as they have in other countries, residents said.

"It never happened here," said Mosbah Zarga, 23, a hairdresser. "If they had forced people to give their daughters to their fighters, we would have resisted."

The militants made it clear they ran the city. Their trademark black flags flew over government buildings, hospitals and schools. Billboards proselytized their brand of Islam.

They operated a radio station that played Koranic verses and broadcast news about the organization's attacks around the world.

They employed workers to clean the streets, and assisted the poor and orphaned children, especially at the end of the holy fasting month of Ramadan, residents said. People were allowed to travel out of the city, to Misurata, Tripoli and other areas.

And the militants treated shopkeepers with respect.

One day, an Islamic State fighter and his wife entered Ziyani's furniture shop and bought about $400 worth of goods.

"They always pay," Ziyani said. "They have a lot of money."

By the end of the summer of 2015, the state-building had grown more sophisticated.

The Islamic State started referring to its self-declared territory in northwestern Libya - which includes the capital, Tripoli - as Wilayat Tarabulus.

In propaganda and social-media forums, the group began portraying Libya as its next frontier as hundreds of foreign fighters arrived to support the cause. Female militants from other countries were encouraged to join them, and doctors, engineers and lawyers who practiced sharia law were recruited to help run the state. Most of the foreigners came from North Africa, Syria, Saudi Arabia and sub-Saharan Africa.

In Sirte, black stamps with the words "Office of General Services" - in English and Arabic - were on the walls of every shop, every business. They meant that the owner was registered with the Islamic State's revenue-collection department and was paying taxes.

While there were some foreign doctors working in the hospitals, there weren't enough. So the militants tried to recruit from the local population.

"They told me to join the hospital or else my head would roll," recalled Salim Shafglouf, 23, a nurse and pharmacist.

The next day, he fled to Misurata.

In a neighborhood near the prison, the militants set up a department that oversaw punishments for anything they deemed un-Islamic, including smoking or dressing inappropriately. It was called Al Hisba, which in Arabic means "accountability." Each transgression came with a specific fine, flogging or jail time.

The militants also had a department that collected vehicle transfer fees for anyone wanting to sell a car. After the sale, the car's logbook was marked with an Islamic State stamp.

They then wanted to expand into issuing driver's licenses and other official documents. Outside Amood's house on that February evening, the two religious police officers asked him to persuade 17 colleagues to join the new traffic police department as well.

Amood, who had repented and pledged allegiance months earlier to Abu Bakr al-Baghdadi, the leader of the Islamic State, had no choice but to agree. "I was frightened," he said.

The militants ordered him to attend meetings to enact their plan. Then, they left in their SUV, emblazoned with the Islamic State flag.

They were still working out their plans when the pro-government offensive began in May.

"Until this moment, we are waiting for our new uniforms," Amood said, smiling.