24,000 Evacuated As Water Levels Surge After Floods In Indonesia 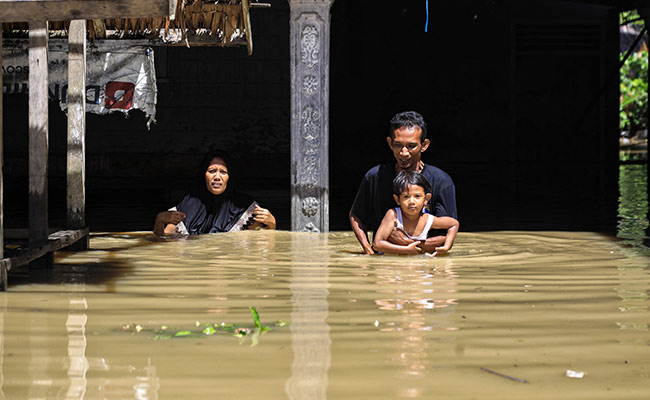 About 24,000 people have been evacuated and two children killed in floods on Indonesia's Sumatra island, officials said Tuesday, with environmental campaigners blaming deforestation for worsening the disaster.

"We experience flooding at least five to eight times a year -- but (this) is one of the most severe," said Muzakkir, from Pirak Timur in hard-hit Aceh province, who like many Indonesians goes by one name.

Syarifuddin, from the village of Lhok Sukon in Aceh, said the "floodwaters just kept rising -- at my house, they are up to my chest".

The province is where the evacuations and deaths have occurred, as well as some buildings been destroyed by fast-moving floodwaters and agricultural land damaged.

Jambi province on Sumatra was also hard hit, with many homes flooded.

Trees act as natural defences against floods, slowing the rate at which water runs down hills and into rivers.

Logging on higher ground was having a particularly damaging impact in Aceh, said Ahmad Shalihin from Walhi.

Neighbouring Malaysia has also been hard hit by flooding since last month, and thousands more people have been forced to flee their homes in recent days amid new downpours.

The number of people evacuated to government shelters stood at around 13,000 on Tuesday, with the states of Johor, Malacca and Sabah the worst affected.

But the numbers have fallen considerably from a peak of around 70,000 in mid-December, when Malaysia saw its worst floods for years.

About 50 people have been killed so far in the floods nationwide, according to police.

Flooding and landslides are common in both Southeast Asian countries during the months-long rainy season.