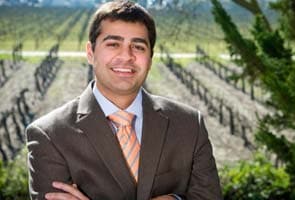 Washington: Ranjit Ricky Gill, a 25-year-old Republican Party leader of Indian origin, grabbed attention of many with an impressive speech over a range of policy issues during party's on-going convention in Tampa.

"Good afternoon. My name is Ricky Gill, and I am humbled to stand before you as a Republican nominee for Congress and a proud son of California's San Joaquin Valley," said Gill, said who is contesting for the House of Representatives from California seat.

"My parents immigrated to the valley from India and Africa with only their love for each other, a strong work ethic and the enduring desire to pursue their American dream.

We all work hard in the valley, and we're proud to live there," he said.

Addressing thousands of party colleagues amid applauds, Gill noted that people in US were "suffering" due to faulty policies; Gill said the US faces crippling unemployment and foreclosures, even the bankruptcy of Stockton, the largest city.

Young people leave or drop out of school to help their families make ends meet, he alleged.

"The valley is a cautionary tale of failed policies, not false ambitions. No one in this country dreams of dependency.

No one hopes for mediocrity. We are ready again to seize the measure of our ambitions not because the government says we can but because we believe we can," he said.

"We need a new generation of leadership to chart the path, to fight for policies that create jobs rather than red tape and to help small businesses succeed rather than helping green energy companies fail," Gill said.

Political analysts believe Gill getting a chance to speak at this young age is indicative of his bright future in the Republican Party.

Promoted
Listen to the latest songs, only on JioSaavn.com
The Indian-American has also received endorsement from top Republican party leadership which include former Florida Governor Jeb Bush, and New Jersey and South Carolina Governors Chris Christie and Nicki Halley respectively.

The New York Times has put Gill in the category of a "Democratic toss up", which means that the seat is no longer safe for incumbent Jerry McNerney and the Democratic party risks the chance of losing the seat.