Mohammed Alaa al-Jaleel, who grew up in Aleppo, has always been mad about cats and has cared for over 170 felines since war ravaged the country. 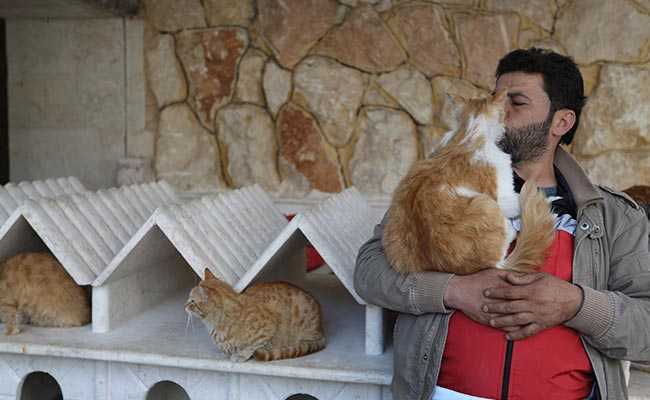 Kafr Naha, Syria: At an unlikely cat shelter in rebel-held northern Syria, Mohammed Alaa al-Jaleel gently holds a feline patient on her back as an ultrasound probe is rolled across her pregnant belly.

In a time of war, she is one of hundreds to have received medical attention at the makeshift animal clinic in Kafr Naha, an opposition-held town in Aleppo province.

"If you want to show mercy to people, start by showing mercy to everything else," says Jaleel, who runs Ernesto's Cat Sanctuary -- named after his favourite furry friend.

The 43-year-old, who grew up in Syria's second city Aleppo, has been mad about cats since he was a boy.

As a young adult in the city, he would drop by the butchers on his way home from work as an electrician to ask for scraps to feed street cats in his neighbourhood.

When war broke out in 2011, he put down his tools to become an ambulance driver to help ferry the wounded -- but never stopped bringing food to his feline friends.

As the war raged on and cat lovers fled the city, Jaleel was left with 170 cats to feed and a new nickname: the Cat Man of Aleppo.

With the help of donations from friends and social media fans, he set up his first cat sanctuary in the city.

But in late 2016, the regime ramped up its deadly bombardment of Aleppo's opposition-held neighbourhoods as it sought to regain control of the whole city.

Determined not to leave them behind, he and fellow feline fans managed to save 22 of the city's cats.

"We gave each family two cats in a plastic vegetable basket," Jaleel says.

Among them was Sukhoi, named after the stealth fighter jets of regime ally Russia.

"He would zip in and grab food from right under the noses of the other cats, just like a Sukhoi jet," he tells AFP.

Syria's war has killed more than 350,000 people and displaced more than half its pre-war human population, as well as many of its domestic animals.

After fleeing Aleppo, Jaleel set up his second shelter -- named after Ernesto -- in early 2017 and housed 18 of the 22 smuggled cats in the animal oasis. 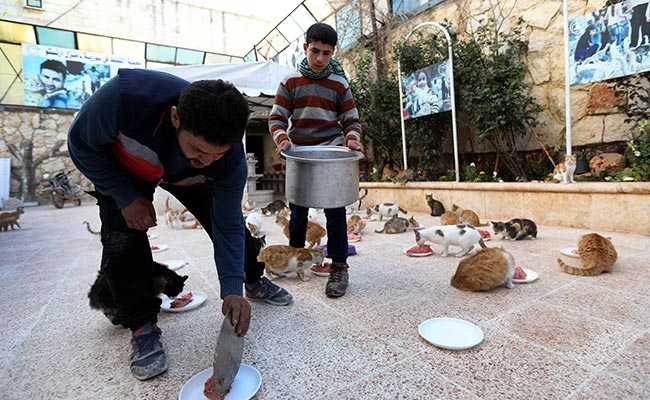 "The cats don't just stay in just one house. They swap with each other and sleep in all of them," Jaleel says, referring to rows of marble cubes with cat-sized entrances, engraved with names like Pouncer and Rose.

Nearby, a grinder churns out streams of bright pink mincemeat that is then scooped out onto plates spread out on the ground for lunchtime.

Eyes closed, a cat with a stripy, light ash coat dips its snow-white nose in, nibbling away.

But the shelter, financed by online crowdfunding campaigns, does more than provide twice-daily meals: it also serves as an animal clinic with its in-house vet.

"We treat all sorts of animals here for free: horses, cows and even chickens," Jaleel says.

During an inventory in January, he and his colleagues discovered they had handed out 7,000 medical prescriptions for free in less than a year.

Mohammad Watar was blown away when he brought in his cat for treatment after food poisoning.

"There are no vets where I live. I asked people and they pointed me to the sanctuary," he says.

"I was so surprised to find this kind of thing existed during this war we're all living," says Watar.

"I saw them treating all sorts of animals. It's really beautiful."

Still, war is never far away: the sanctuary's main building bears the marks of gun fire.

Last month, it cancelled a children's party after a young boy was shot near the shelter, according to its English-language Facebook page. 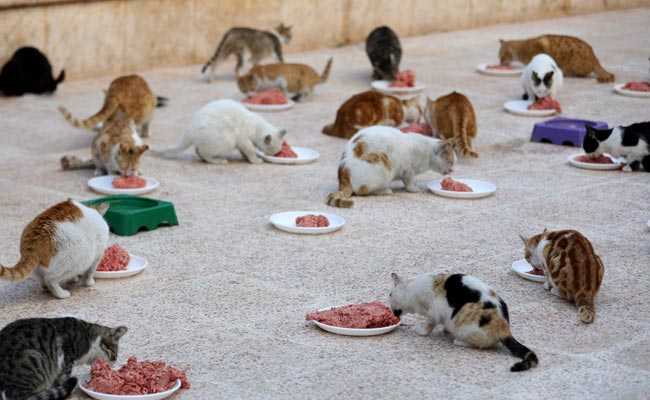 As war raged in Syria and people fled, 170 cats were left behind to be taken care of in the city

Footage posted online depicted a man in a cat sanctuary t-shirt carrying a child with blood streaming down his calf.

Even the shelter's cats are treated for war wounds, says the centre's vet, Mohammed Yusuf.

"Just like many people are wounded by all the different weapons in the area, animals too suffer the same injuries," he tells AFP.

Some stay under observation at his clinic for weeks, but not all get the treatment they need.

"We're living in a war and facing severe shortages of veterinary medicines for wounds as well as vaccines," Yusuf says.

In a time of death and destruction, the pride of the sanctuary is its ability to carry out sonograms of animal mothers-to-be.

Promoted
Listen to the latest songs, only on JioSaavn.com
"We examine them and diagnose how many foetuses there are and when they are due, and we prepare to welcome the new births," Yusuf says.