In Private, Trump Vents Frustration Over Lack Of Progress On North Korea

The lack of immediate progress, though predicted by many analysts, has frustrated the president, who has fumed at his aides in private even as he publicly hails the success of the negotiations. 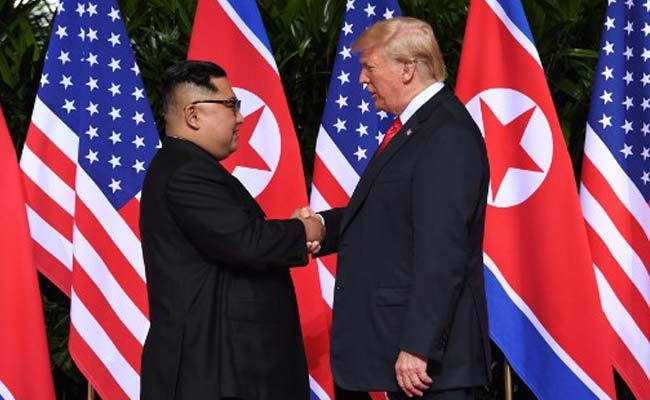 When he emerged from his summit with Kim Jong Un last month, President Donald Trump triumphantly declared that North Korea no longer posed a nuclear threat and that one of the world's most intractable geopolitical crises had been "largely solved."

But in the days and weeks since then, U.S. negotiators have faced stiff resistance from a North Korean team practiced in the art of delay and obfuscation.

Diplomats say the North Koreans have canceled follow-up meetings, demanded more money and failed to maintain basic communications, even as the once-isolated regime's engagements with China and South Korea flourish.

Meanwhile, a missile-engine testing facility that Trump said would be destroyed remains intact, and U.S. intelligence officials say Pyongyang is working to conceal key aspects of its nuclear program.

The lack of immediate progress, though predicted by many analysts, has frustrated the president, who has fumed at his aides in private even as he publicly hails the success of the negotiations.

The accounts of internal administration dynamics come from conversations with a half-dozen White House aides, State Department officials and diplomats, who spoke on the condition of anonymity to discuss the sensitive negotiations.

Officials say Trump has been captivated by the nuclear talks, asking staffers for daily updates on the status of the negotiations. His frustration with the lack of progress has been coupled with irritation about the media coverage of the joint statement he signed on June 12 in Singapore, a document that contains no timeline or specifics on denuclearization but has reduced tensions between the two countries.

"Trump has been hit with a strong dose of reality of North Korea's negotiating style, which is always hard for Americans to understand," said Duyeon Kim, a Korea expert at the Center for a New American Security.

Trump's interest in the issue has put a particularly bright spotlight on Secretary of State Mike Pompeo, who has tried to wring concessions from his counterpart, Kim Yong Chol, a former spy chief viewed by the Trump administration as uncompromising and unable to negotiate outside the most explicit directives from Kim Jong Un.

A low point from the perspective of U.S. officials came during Pompeo's third visit to Pyongyang on July 6 when he pressed North Korean officials for details on their plans to return the remains of U.S. soldiers killed during the Korean War, as they had agreed to do in Singapore. The issue had been discussed in several meetings and was viewed by the United States as an easy way for North Korea to demonstrate its sincerity.

But when Pompeo arrived in Pyongyang, the North Koreans insisted they were still not ready to commit to specific plans, according to diplomats familiar with the discussions.

The delay angered U.S. officials, who were under pressure to deliver given Trump's premature announcement on June 20 that North Korea had already "sent back" the remains of 200 soldiers.

The sentiment worsened when Kim Jong Un chose not to meet with Pompeo during his stay as had been expected. Pompeo later denied that a meeting was planned, a claim contradicted by diplomats who said the secretary initially intended to see the North Korean leader.

Unable to secure an agreement on remains during his trip, Pompeo scheduled a meeting between the North Koreans and their Pentagon counterparts to discuss the issue at the demilitarized zone on July 12. The North, however, kept U.S. defense officials waiting for three hours before calling to cancel, the diplomats said. The North Koreans then asked for a future meeting with a higher-ranking military official.

"Leaving another U.S. official standing at the altar, waiting forlornly for the North Korean representative to show up adds insult to injury," said Bruce Klingner, a North Korea scholar at the conservative Heritage Foundation. "Pyongyang has reverted to its heavy-handed negotiating tactics."

The Trump administration has maintained a strong public show of support for the negotiations, even as North Korea denounced the United States' "unilateral and gangster-like demand for denuclearization" after Pompeo's last visit and described the discussions as "cancerous."

On Wednesday, Trump said he secured a commitment from Russia to "help" with the North Korea issue. "The process is moving along," he tweeted. "Big benefits and exciting future for North Korea at end of process!"

But late last week in meetings with his aides, Trump bristled about the lack of positive developments in the negotiations. And on Friday at the United Nations, his ambassador, Nikki Haley, accused Russia of blocking efforts to discipline North Korea's illegal smuggling.

Trump and his senior team "haven't given up entirely" on the goal of full denuclearization, but they are worried, said one person familiar with the discussions.

Climbing down from earlier soaring rhetoric, Trump told CBS this week that "I'm in no real rush. I mean whatever it takes, it takes," he said.

That more patient approach stands in contrast to earlier Trump administration demands for North Korea to dismantle its nuclear program within a year.

"Trump is too vested to walk away right now," said Victor Cha, a North Korea expert who the Trump administration nearly selected to be the next U.S. ambassador to Seoul. "At least until after the midterms."

U.S. officials lay some of the blame on Kim Yong Chol, who despite being North Korea's chief negotiator has consistently stonewalled discussions by saying he is not empowered to talk about an array of pertinent issues.

That dynamic drew the ire of U.S. officials in an early July meeting in Panmunjom when he refused to discuss the opening of a reliable communications channel or even specific goals of Pompeo's then-upcoming trip to Pyongyang, diplomats briefed on the meetings said.

The U.S. officials in the meeting, led by State Department official Sung Kim and the CIA officer Andy Kim, wanted to discuss Pompeo's visit and make progress on returning the fallen soldiers' remains. But Kim Yong Chol said he was authorized only to receive a letter Trump had written to Kim Jong Un.

When U.S. officials tried to raise substantive issues, Kim Yong Chol resisted and kept asking for the letter. Unable to make headway, the Americans eventually handed over the letter and ended the meeting after only an hour.

"[Kim] has a reputation for being extremely rude and aggressive," said Sung-Yoon Lee, a North Korea scholar at Tufts University.

Kim Yong Chol's negotiating tactics so frustrated U.S. officials that several expressed hope that he would be replaced as top negotiator by Ri Yong Ho, the North's more agreeable minister of foreign affairs. The swap appeared possible because of the joint statement in Singapore, which explicitly named Pompeo as the top U.S. negotiator but referred to his counterpart only as a "relevant high-level DPRK official."

"I think there is a debate within North Korea over assigning Kim Yong Chol or Ri Yong Ho as the counterpart," said Cha, who is also a scholar at Georgetown University. "Ri knows the issues better and can speak perfect English. Kim is a former spy, not a negotiator."

Ri greeted Pompeo at the airport earlier this month alongside Kim Yong Chol, but the former spy chief spent more time with Pompeo than any other senior North Korean official during the two-day visit, seemingly solidifying his position.

In the absence of progress on denuclearization, the Trump administration is likely to focus on the war remains.

At a meeting in the demilitarized zone on Sunday, the two sides agreed to recommence field operations to search for the remains of some 5,300 Americans still missing from the conflict in North Korea. Pompeo said this week that he believes the first sets would arrive in the United States "in the next couple weeks."

U.S. officials familiar with the discussions said the North pledged to return 55 sets of remains on July 27, the 65th anniversary of the signing of an armistice that ended the war. But Pentagon officials, who sent transit cases to the demilitarized zone weeks ago, are wary of North Korea's pledges given its previous cancellations.

One of Pompeo's key objectives ahead of the Pyongyang meeting was to improve basic communications with the North, which had been spotty and unresponsive through intelligence and diplomatic channels, U.S. officials said. The two sides have established working groups aimed at improving the communication problem, a senior State Department official said.

Many of the president's top security and intelligence officials have long doubted that North Korea would live up to any of its commitments. But given the lack of options outside of the diplomatic realm, some analysts said a tolerant approach still provides the best outlook.

"I worry that Trump might lose patience with the length and complexities of negotiations that are common when dealing with North Korea, and walk away and revert back to serious considerations of the military option," said Duyeon Kim, the Korea scholar. "Getting to a nuclear agreement takes a long time, and implementing it will be even harder."