In North Korea, Closest Thing To American Culture Is This Burger Joint

The 1970s-style decor is predominantly brown, pictures of the Kimilsungia and Kimjongilia flowers named for the North's rulers are on show, and footage of the State Merited Chorus plays on a television. 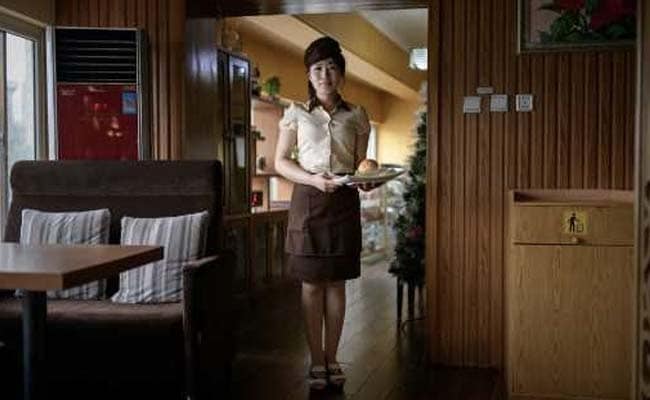 One of the closest things to an example of American culture in Pyongyang is the Green Leaf Coffee Shop — the top burger joint in the North Korean capital.

Across the road from the April 25 Culture House -- named for the day the North's founder Kim Il Sung set up anti-Japanese guerrilla forces -- it overlooks the showpiece Ryomyong Street development his grandson and current leader Kim Jong Un opened in 2017.

The 1970s-style decor is predominantly brown, pictures of the Kimilsungia and Kimjongilia flowers named for the North Korea's rulers are on show, and footage of the State Merited Chorus plays on a television.

A basic beefburger costs slightly less than $2, while a cheeseburger with minced beef and bacon is around $4.

In a nod to local tastes, it also offers burgers with kimchi, and some with the bun replaced by two layers of rice, among other dishes.

The burgers come wrapped in paper on plastic trays, the chips in red cartons echoing McDonald's, albeit served by uniformed waitresses.

But the isolated North Korea has long seen the United States as its implacable enemy, blaming it for the division of the Korean peninsula, countless atrocities during the Korean War, and its economic struggles.

In the run-up to Kim Jong Un's summit in Hanoi with US President Donald Trump, the nuclear-armed North's official media barely mentioned the meeting.

The burger restaurant's founders -- it was set up by a Singaporean businessman, Patrick Soh, who operated a franchise of the US chain Waffletown in the Lion City -- avoided American connotations.

They called it Samtaesong, which Soh translates as "three big stars", and it has since been renamed again, with the menus now describing it as owned by the Sogwang High-Tech Corporation.

The clientele is mostly small family groups and young couples, and manager Kim Yong Ae says the 300 to 500 customers a week do not think of burgers as American.

"We brought it from Singapore's Waffletown, so people know it just as hamburgers, a form of layered bread, rather than McDonald's," she told AFP.

"Some think of it as Singaporean food."

North Korean authorities teach their citizens from birth to despise the US, with war museums depicting white soldiers slaughtering innocent civilians, their gnarled faces twisted into rictuses of hate.

One memorial site in Sinchon -- where US forces are said to have massacred more than 35,000 people, although foreign researchers say the toll is unclear and there is no evidence of American culpability -- features a "revenge-pledging place" where busloads of visitors can hurl abuse at the US.

"People are influenced in multiple ways by those narratives, even if not everyone buys it wholesale," said Sokeel Park of Liberty In North Korea, which helps defectors travel from China to third countries.

"There are some alternative sources of narrative about the US," he added.

Pyongyang closely controls all media in the country, but illicit content circulates on USB sticks, watched in secret by citizens who face criminal punishment for doing so.

Most of it is Korean-language rather than foreign, according to observers, but Park said some US films had entered the country -- American music less so -- and some people listened to Radio Free Asia and Voice of America broadcasts.

After the vitriol of 2017, when the two countries' leaders traded personal insults and threats of war, the official KCNA news agency's tone has adapted alongside the diplomatic drive, offering few overt criticisms of the US or Trump and instead reserving its bile for former colonial overlord Japan.

Pyongyang did nothing to shy away from covering the first summit in Singapore, portraying Kim and Trump meeting as equals.

And an about-turn in the relationship would not "cause the cognitive dissonance that many people expect it would", according to Simon Cockerell, general manager of specialist travel agency Koryo Tours, who has been to the North 176 times over 17 years.

The North Koreans he has spoken to, Cockerell says, are "all pretty uniformly against the US government as you might expect", but "have the nuance to not identify the entire US population as their enemy".

And they were "mentally flexible and intelligent enough to understand and adapt to the message changing while still internalising the core belief: that the US is the enemy of the DPRK and will be until the most basic agreements are reached, then things may change!"