The bright red paint appeared hours before Putin announced he was annexing four parts of Ukraine occupied by his army. 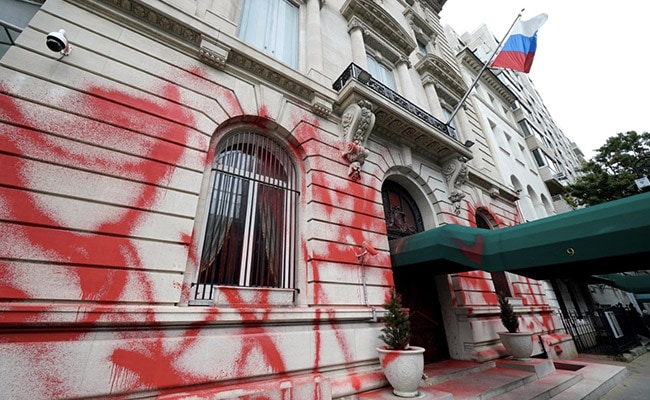 The Russian Consulate in New York was vandalised with red paint hours before Putin's annexation speech.

The Russian Consulate in New York was vandalised with red spray paint early Friday, in an apparent protest as President Vladimir Putin pursues his bloody invasion of Ukraine.

Officers said they responded to an emergency call just after 1:30 am that reported paint sprayed across the facade of the consulate on Manhattan's Upper East Side.

A police spokeperson said the investigation is ongoing into the potential "bias incident" and no arrests have been made.

The bright red paint appeared hours before Putin announced he was annexing four parts of Ukraine occupied by his army.

Shelling also killed at least 30 people in Ukraine's southern region of Zaporizhzhia -- one of the worst attacks against civilians in months.

Rosie Morse, a retiree who lives in the neighborhood near the consulate, said the spray paint "looks like art work."

"But the meaning is to express our feeling about Putin, and I can't say that I don't agree," she told AFP.

"It's vandalism but it is the expression of how people in New York are realizing Putin is killing people," said another bystander, Romen Eaulin.