The building, shaped like a modernist dragon, was put on sale by creditors after being seized from billionaire Guo Wengui, who fled into exile after being accused of corruption in 2014. 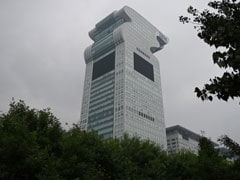 The 40-story Pangu Plaza went on sale for 24 hours on the auction site of Chinese internet giant Alibaba.

A Beijing skyscraper confiscated from a fugitive Chinese billionaire was sold in an online auction Tuesday for 5.18 billion yuan (US$734 million), the latest twist in a salacious saga dating back to before the 2008 Olympic Games.

The spectacular 40-story Pangu Plaza, which dominates the area next to the Bird's Nest Olympic stadium that was the centrepiece of the Beijing Games, went on sale for 24 hours on the auction site of Chinese internet giant Alibaba.

More than 145,000 internet users followed the auction, but only two bids were cast -- with the winner snapping up the property for little more than its reserve price.

The buyer was YuCheng Zhiye, a Beijing-based property development and management company, according to the auction site.

The building, shaped like a modernist dragon, was put on sale by creditors after being seized from billionaire Guo Wengui, who fled into exile after being accused of corruption in 2014.

Now based in New York, he has become an outspoken critic of China's communist regime and President Xi Jinping, who he accuses of using an anti-graft campaign to bring down political opponents.

He regained control of the property after a sex tape emerged featuring Beijing deputy mayor Liu Zhihua, who was responsible for allocating land around where the Olympic venues were built.

Liu was later found guilty of massive corruption and given a suspended death sentence.

The landmark Pangu Plaza consists of four office buildings making up the body of a dragon, with a uniquely shaped taller fifth structure as its head.

It featured briefly in the 2014 movie "Transformers: Age of Extinction".

In a video broadcast on Twitter last month, Guo said the reserve price of the building was well undervalued.

(Except for the headline, this story has not been edited by NDTV staff and is published from a syndicated feed.)
Comments
Guo WenguiChinaBeijing