In Canada's Frozen North, Miners Dig Up Diamond The Size Of Chicken Egg

The discovery is the seventh-biggest this century, according to Bloomberg calculations, and would be among the 30 largest stones ever unearthed. 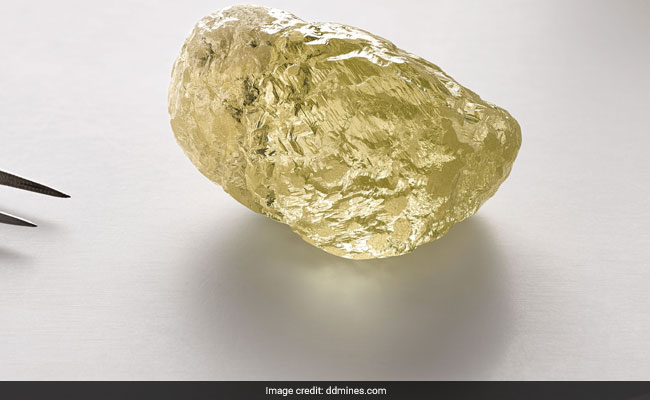 The 552-carat yellow diamond is almost thrice the size of the next largest stone ever found in Canada.

The biggest diamond ever found in North America has been unearthed by Dominion Diamond Mines and Rio Tinto Group at a mine in Canada's frozen north.

The 552-carat yellow gem was found at the Diavik mine in the Northwest Territories, and is almost three times the size of the next largest stone ever found in Canada. While Diavik and the neighboring Ekati mine produce some very high quality diamonds, they're not renowned for the sort of huge gems normally found in southern African mines.

"We can label it fancy yellow, but beyond that, due to its rough nature and the abrasions received through the processing facility, that's all we can comment on," Durgin said in an interview. "It's very hard to give a ballpark estimate. It all depends on, again, the cutting and the resulting stone it ends up."

The discovery is the seventh-biggest this century, according to Bloomberg calculations, and would be among the 30 largest stones ever unearthed. The biggest was the 3,106-carat Cullinan, found near Pretoria in South Africa in 1905. It was cut into several polished gems, the two largest of which -- the Great Star of Africa and the Lesser Star of Africa -- are set in the Crown Jewels of Britain.

There have been a slew of big finds in recent years as better technology helped miners first detect, and then not break big stones that are susceptible to being smashed in the mining process. Among those are diamonds found by Lucara Diamond Corp. and Gem Diamonds Ltd. that fetched between $40 million and $63 million.

While the Diavik mine is 60 percent owned and fully operated by Rio, Dominion bought the stone in an internal auction process from its partner. Dominion said it will select someone soon to cut and polish the stone.

"It's a beautiful gem-quality diamond," Durgin said, adding that it was somewhat of a "miracle" that the stone survived the mining process. "It's very unusual for a diamond of this size in this part of the world. So it's a very unique discovery."

In 2015, Rio unearthed a 187.7 carat gem-quality diamond from Diavik. 'Foxfire' narrowly escaped being pulverized because its elongated shape allowed it to slip sideways through a filtering screen. The diamond was exhibited at the Smithsonian before being turned into a pair of pale yellow earrings weighing a total of 77.7 carats. The earrings sold for over $1.5 million at Christie's earlier this month.

This year's find comes at a good time for Dominion. Since billionaire Dennis Washington bought the company for $1.2 billion last year, there's been a management merry-go-round with at least five senior personnel leaving. That includes CEO Patrick Evans, who left last week after just over a year at the helm. Dominion needs to decide if it will pull the trigger on expansion projects that would extend the life of the Ekati mine.

Diamond mining in this area of Canada's sub-arctic is incredibly difficult. There are no permanent roads, meaning the only access is by air or, for a few months a year, ice roads that have to be rebuilt each winter.

Meanwhile, the global market has been under pressure, especially for smaller and lower quality stones. There's currently an oversupply of such diamonds, and a weaker Indian rupee has put pressure on manufacturers in the country where about 90 percent of gems are cut and polished. Major cutting centers have also been squeezed by low margins and a drop in trade finance.