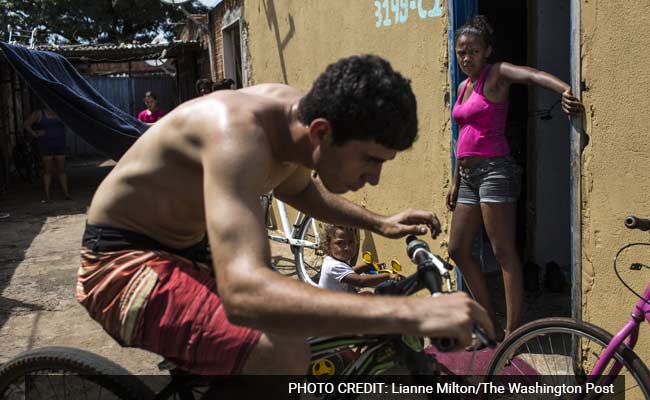 Ribeirao Preto, Brazil: Watching kids skate around an ice rink inside the 1-million-square-foot Ribeirao Shopping center, you would hardly guess that this city is one of the hardest hit by the Zika epidemic.

Young women in dresses buy lattes at a Starbucks by the rink. Men in shorts and T-shirts take selfies with their cellphones next to a stand selling exercise machines. If they look unconcerned, it's because, in this air-conditioned space, the mosquito that carries Zika can't survive.

Although 230 miles from the southeastern coast, Ribeirao Preto is sometimes called the California of Brazil. The nickname traces back to the 1980s, when a boom in sugar and ethanol production raised living standards for many residents. But the boom left many others behind.

In this respect, Ribeirao serves as a microcosm for a country with a vast gap between rich and poor. The class divide is reflected in the lopsided way that Zika is spreading in Brazil, one of the world's most unequal countries - where the richest 1 percent of the population earns more than a quarter of all income.

You don't have to go very far to see the other side in Ribeirao. Just a 20-minute drive north from Ribeirao Shopping, in the neighborhood of Jardim Jandaia, extended families live in narrow shacks of dull-red cinder block, sleeping on bare mattresses in ovenlike rooms sectioned off by hanging blankets.

One resident, 20-year-old Fernanda de Oliveira Marchini, fell ill at the beginning of February. At first she thought it was dengue fever. On top of Zika, Ribeirao has been hit by one of its recurring dengue epidemics, and the two viruses cause some of the same symptoms, such as headaches and rashes.

But at a public clinic, a doctor told her that she might have Zika. The news devastated Marchini, who is three months pregnant. While usually milder than dengue, Zika has been linked to a birth defect known as microcephaly, in which babies are born with abnormally small heads.

"This is my first child," Marchini said, her eyes filling with tears. "I got scared about the problems he might have. I started having contractions every three minutes, and they had to give me medicine to keep me from losing my baby." Her first test for Zika was inconclusive, so she must return for another.

Since last year, Zika has infected an estimated 1.5 million Brazilians, mostly in the hot, poor northeast. Although the virus arrived late to this city of 660,000, the local health department already suspects that 130 pregnant women may have caught it. The cases appear concentrated among lower-income residents. That trend is also evident with dengue - of the 1,557 cases since January, only 160 came from the well-to-do south side.

Benedito Fonseca, a professor of infectious medicine at the University of Sao Paulo at Ribeirao Preto, calls the Aedes aegypti mosquito "democratic" because it will suck anyone's blood - rich or poor. But it thrives in densely populated areas like those on the city's poor outskirts, where few can afford screened windows. On a minimum wage of $220 a month, even mosquito repellent is a luxury for such residents.

Inadequate public services also favor the buildup of stagnant water in rooftop tanks or old tires where the mosquito can lay its eggs. Neighborhoods such as Jardim Jandaia are plagued by informal garbage dumps, and in some places, raw sewage trickles along sidewalks.

Public-health officials insist that every family examines its home regularly for mosquito breeding grounds. But as Fonseca put it, "If you're better off, it's easier to protect yourself."

This rings true in southside neighborhoods that resemble Los Angeles subdivisions, with sprawling houses and chlorine-treated swimming pools tended by hired help. Looming over the Ribeirao Shopping center are luxury high-rises with shining glass windows and air conditioning, amenities that are still uncommon in Brazil.

The effects of the country's disconnect can be seen at Hospital Sao Lucas, which serves only patients who have private insurance or can pay out of pocket. There, infectious-medicine specialist Luiz Freitas estimated that while dozens of patients had been treated for Zika, not one was a pregnant woman.

On a recent morning, the reception area in the hospital's treatment center for dengue and Zika was full but comfortable, with a few dozen patients in padded chairs, many watching a flat-screen television. Surrounded by abstract paintings, they waited an hour on average to undergo blood tests and see a doctor.

The scene was different at Quintino Facci II, a free public clinic not far from Jardim Jandaia. That same day, families overflowed onto the sidewalk out front. Inside, patients received intravenous saline in a sweltering hallway with blackish mold stains on the ceiling. Viviane da Conceicao da Rocha, 20, sat on a wooden bench alone in the hallway. Eight months pregnant, she works at a supermarket. She had spent seven hours at the clinic the previous day.

"The doctor didn't even examine me," she said. "She just had me take saline," a standard treatment for dehydration caused by dengue. Rocha had returned because her symptoms didn't go away, and a different doctor told her that she might have Zika. Now she was waiting to give blood for a test. This time she would spend four hours at the clinic.

Ribeirao Preto's health secretary, Stenio Miranda, says the city is doing its best with limited resources to contain dengue and Zika. Asked about Ribeirao's fame as a Brazilian California, he lamented that the comparison had ever been made.

"It created expectations that don't have any basis in reality," he said. "We have a middle class with a fairly high standard of living. But like the rest of Brazil, we also have scandalous inequality."