In Bin Laden Raid's Shadow, Bad Blood And The Suspected Poisoning Of A CIA Officer 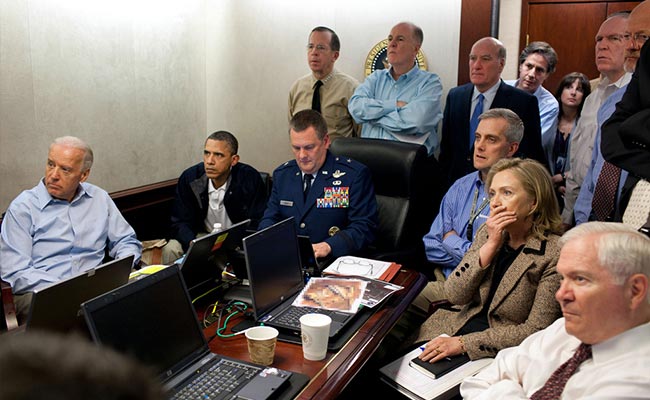 President Barack Obama and Vice President Joe Biden, along with members of the national security team, receive an update on the mission against Osama bin Laden in the Situation Room of the White House.

Two months after Osama bin Laden was killed, the CIA's top operative in Pakistan was pulled out of the country in an abrupt move vaguely attributed to health concerns and his strained relationship with Islamabad.

In reality, the CIA station chief was so violently ill that he was often doubled over in pain, current and former U.S. officials said. Trips out of the country for treatment proved futile. And the cause of his ailment was so mysterious, the officials said, that both he and the agency began to suspect that he had been poisoned.

Mark Kelton retired from the CIA and his health has recovered after he had abdominal surgery. But agency officials continue to think that it is plausible - if not provable - that Kelton's sudden illness was somehow orchestrated by Pakistan's Inter-Services Intelligence agency, known as the ISI.

The disclosure is a disturbing postscript to the sequence of events surrounding the bin Laden operation five years ago, and adds new intrigue to a counterterrorism partnership that has often been consumed by conspiracy theories.

That 2011 time frame was marked by extraordinary turbulence in the United States' relationship with Pakistan, a wary alliance that was close to collapse when U.S. Navy SEALs descended on the al-Qaida leader's compound in Abbottabad.

Even if the poisoning suspicion is groundless, the idea that the CIA and its station chief considered the ISI capable of such an act suggests that the breakdown in trust was even worse than widely assumed.

Kelton, 59, declined multiple requests for an interview, but in a brief exchange by phone he said that the cause of his illness "was never clarified," and added that he was not the first to suspect that he had been poisoned. "The genesis for the thoughts about that didn't originate with me," he said.

In the conversation, Kelton declined to answer questions about his illness or tenure in Pakistan. "I'd rather let that whole sad episode lie," he said. "I'm very, very proud of the people I worked with who did amazing things for their country at a very difficult time. When the true story is told, the country will be very proud of them."

U.S. officials acknowledged that the CIA never obtained clear evidence that Kelton was poisoned or confronted Pakistan with that charge. Even so, current and former U.S. intelligence officials said that the ISI has been linked to numerous plots against journalists, diplomats and other perceived adversaries, and that the spy agency's animosity toward Kelton was intense.

Officials said the ISI chief at the time, Ahmed Shuja Pasha, routinely refused to speak with Kelton or even utter his name, referring to the dour CIA station chief as "the cadaver."

Although Kelton's tenure lasted only seven months, it was in many ways a parade of humiliation for his hosts. Within days of Kelton's arrival, one of his subordinates, CIA contractor Raymond Davis, was involved in a Jason Bourne-style shootout in Lahore. Kelton signed off on dozens of drone strikes that infuriated the Pakistanis. He also presided over the final preparations for the assault in Abbottabad that killed bin Laden and, to many, exposed Pakistan's security agencies as incompetent.

The CIA declined to comment, and asked that Kelton not be identified by his full name. But since retiring, Kelton has posted his name and portions of his CIA resume on publicly accessible Web sites. He has not disclosed his assignment in Pakistan, but other key figures associated with the bin Laden operation have either come forward over the past five years or have been publicly identified.

Pakistan dismissed the allegations against the ISI.

"Obviously the story is fictional, not worthy of comment," said Pakistan Embassy spokesman Nadeem Hotiana. "We reject the insinuations implied in the allegations."

U.S. officials emphasized that the relationship with Pakistan had been deteriorating for years before Kelton arrived in Islamabad.

By 2009, officials said, U.S. intelligence agencies had evidence that the ISI was complicit in the terrorist attacks in Mumbai, suspected the ISI of staging raids to disguise the deaths of militants killed in custody and was convinced that the ISI routinely tipped off its proxies when they were about to be struck by CIA drones.

The strain intensified in 2010 when the CIA sharply escalated the pace of its drone campaign and Pasha was named in a Mumbai attack-related lawsuit in the United States. In apparent retaliation, a suit filed in Pakistan by alleged victims of a drone strike revealed the name of the CIA's then-station chief, Jonathan Bank.

Concerned for Bank's safety, the CIA employed a modest ruse to get him out of the country, former officials said. As CIA Deputy Director Michael Morell finished a series of scheduled meetings in Islamabad, Bank escorted his boss to a waiting agency plane. Then, without any notice to Pakistani authorities and in violation of protocol, Bank stayed onboard as the flight crew closed the door.

The next station chief would face a doubly daunting assignment - managing the toxic relationship with the ISI while secretly pursuing the most promising lead in more than a decade on bin Laden's whereabouts.

Kelton, known for an acerbic personality, was not an obvious candidate for the role. He had little experience with counterterrorism operations and had spent much of his career in traditional Cold War outposts, including Moscow, where the CIA remained locked in a decades-long duel with the KGB and its successor organization.

But given the increasingly tense atmosphere in Islamabad, CIA Director Leon Panetta and others concluded that years of waging adversarial espionage could be an asset. "They thought his Moscow experience was a very good credential," said a former senior CIA official who, like others, spoke on the condition of anonymity to discuss agency operations and personnel.

Former U.S. officials who worked alongside Kelton said he began preaching "Moscow Rules" upon arrival, meaning that the ISI should be treated as a determined foe rather than a problematic partner. The inevitable clash came sooner than either side expected.

Less than 48 hours after Kelton's arrival in Islamabad, CIA contractor Davis was arrested after opening fire on two armed Pakistani men accused of trying to rob him. In Davis's car, authorities found a conspicuous collection of spy gear, reportedly including a disguise kit, infrared flashlight and a camera.

Some in the U.S. Embassy argued that lying about Davis would only insult the Pakistanis, who might be persuaded to release him if the agency acknowledged the blunder. But Kelton and his superiors at headquarters were adamantly opposed.

"Don't tell them anything," Kelton told then-U.S. Ambassador Cameron Munter, according to former officials familiar with the exchange. The stonewalling continued for weeks - with President Barack Obama demanding the release of "our diplomat" - until Munter secured permission to deal with Pasha directly and admit Davis's ties to the CIA.

Davis was released March 16 after a secret court proceeding in which the families of those killed were paid $2.4 million. The CIA's drones, which had gone dormant during much of Davis's captivity, roared back to life the next day, carrying out a strike that killed at least 40 people at a tribal council meeting in Datta Khel.

Pasha was livid, sending word to Munter that the strike amounted to a "kick in the teeth" after arranging the Davis deal. Pasha's relationship with Kelton never recovered, and the two rarely spoke in the ensuing months.

In a recent interview, Munter described 2011 as "by far my most difficult year in the Foreign Service." Attempts to reach Pasha through the Pakistan Embassy in the United States were unsuccessful.

On the first night in May, as midnight approached in Pakistan, Kelton, Munter and a senior U.S. military official gathered in a secure CIA room in the embassy to watch footage from a stealth drone circling over Abbottabad as the bin Laden raid began.

The trio had made secret preparations for possible Pakistani reprisals, officials said, drafting evacuation plans that called for employees at scattered U.S. diplomatic sites to flee across the border into India or be scooped up by the USS Carl Vinson from the Karachi shore. Those at the embassy would have to hunker down.

At first, Pakistan seemed paralyzed by the raid. But amid mounting public anger and recriminations from abroad - Panetta accused Islamabad of being inept or complicit - senior Pakistani officials began to lash out.

A week after bin Laden's death, a story in the Pakistani press said that Pasha had summoned the CIA station chief to a meeting and railed at him for keeping the bin Laden operation a secret. The story contained a garbled version of Kelton's name, identifying him as "Mark Carlton."

Including the Bank episode, it was the second time in six months that the CIA's top operative in Pakistan had been outed, a major breach of the unwritten rules of espionage. But this time the agency left Kelton in place even as emerging details about the raid - including the existence of a CIA safe house in Abbottabad and the agency's use of a Pakistani doctor to try to get DNA samples from residents of bin Laden's house - compounded Pakistan's resentment.

Amid the fallout, Kelton began to experience stomach pain. At first he assumed he had come down with the sort of digestive ailment that afflicts many Westerners in Pakistan, former U.S. officials said. But as the symptoms worsened, he began to miss days of work, and left the country several times for treatment.

By July, Kelton was in what one official described as a "severe medical crisis." Less than seven months after arriving for a tour that was supposed to last at least two years, Kelton told headquarters that he could no longer function in the job.

Some of Kelton's colleagues, including several who were based in Pakistan, remain skeptical that the ISI would risk Pakistan's multibillion-dollar dependency on the United States by poisoning a high-ranking U.S. official. Instead, skeptics believe that Kelton's Moscow mind-set saw conspiracy in a condition more likely caused by bad food or the pressure of the job.

"Stress does funny things to the body," said one former senior agency official, who added that "there is zero evidence" Kelton was poisoned.

The agency never mounted a full investigation to determine whether Kelton was poisoned, officials said, but took his suspicion seriously enough to search its intelligence files for any indication that Kelton had been targeted.

Back in the United States, Kelton took months to recover and ended up having abdominal surgery. Kelton acknowledged that he had the procedure but declined to discuss its nature. After recovering, he was named deputy director for counterintelligence, a job that put him in charge of protecting the agency from foreign spy services.

Since retiring last year, Kelton has written articles for a national-security-related website called The Cipher Brief, including a piece about the Kremlin's alleged role in the 2006 assassination of a former Russian intelligence operative, who was poisoned in London with a lethal dose of radioactive polonium.

In the article, which argues that Russian President Vladimir Putin was complicit in the attack, Kelton quotes a line from a 1939 espionage novel: "The important thing to know about an assassination is not who fired the shot, but who paid for the bullet."