In A First, Putin Visits Bridge On The Frontline In Ukraine

It was the closest the 70-year-old Russian leader has come to the frontline in Ukraine, after sending troops to the pro-Western country on February 24. 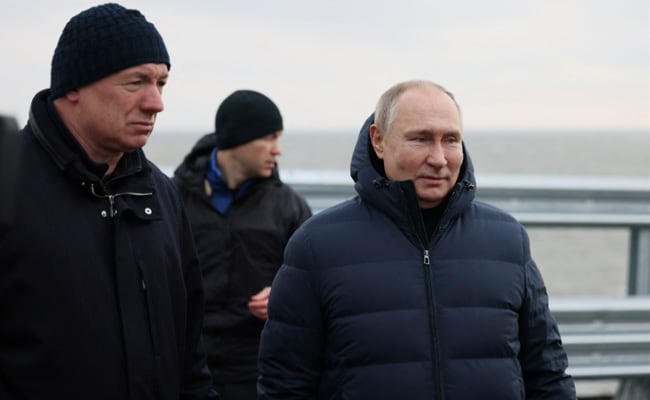 It was the closest Vladimir Putin has come to the frontline in Ukraine. (File)

President Vladimir Putin on Monday visited a bridge that links Moscow-annexed Crimea to the Russian mainland weeks after the vital link was hit by a blast, images on state television showed.

It was the closest the 70-year-old Russian leader has come to the frontline in Ukraine, after sending troops to the pro-Western country on February 24.

Vladimir Putin drove a Mercedes across the bridge as Russia re-opened it to traffic following an October blast Moscow blamed on Ukraine.

The Kremlin chief also heard a report from Deputy Prime Minister Marat Khusnullin about repair work on the bridge and spoke to construction workers.

In October, the Kerch bridge was partially destroyed in an attack attributed to Ukraine by Moscow.

On Friday, Vladimir Putin said that the Russian attacks were Moscow's "inevitable" response to Ukraine's strikes on Russian infrastructure including the Kerch bridge.