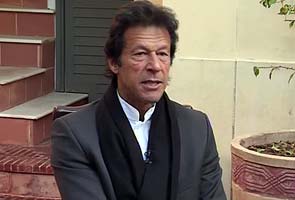 Washington: Imran Khan, chief of Pakistan Tehreek-e-Insaf party and a staunch critic of America, is raising funds in the US through an agent to promote democracy and eradicate terrorism in his country, improve ties between the two nations, among other objectives.

As per the filings made with the US Department of Justice, Pakistan Tehreek-e-Insaf, USA (the registered agent) transmitted funds totally USD 775,000 (over seven crore Pakistani rupees) to the party in Pakistan for the purpose of "operating expenses" between October 31, 2012 to March 3,2013.

In addition to the US, the funds are also being collected from Canada, mentions a latest filing by the PTI USA, LLC, the party's registered agent here.

Among all the political leaders in Pakistan, the cricketer-turned-politician has been the most vocal critic of the US and its policies towards Islamabad. During his election campaign for the May 11 elections, Mr Khan has been very vocal against the US-led war on terror, especially the drone attacks inside Pakistan.

According to the filings, PTI USA was appointed as a registered agent of Mr Khan's party in late March this year, prior to which the party had another agent here.

Under the Foreign Agents Registration Act (FARA) here, all the agents working for foreign entities need to register themselves with the Justice Department and make regular disclosures about their fund-raising and other activities. As per a latest filing made by PTI, USA, LLC, it has not received any money from Mr Khan's party and has volunteered to work for PTI without any financial compensation.

The filing further mentioned that the agent "performed a membership campaign to promote and collect funds on behalf of the foreign principal (Khan's party) in an effort to improve US-Pakistan relations, promote democracy, improve judicial and economic justice, modernise the education system, eradicate terrorism, and provide humanitarian assistance in Pakistan."

In the registration statement, Khan said that the overall aims and objectives of PTI, USA, are to promote the party and its manifesto in the US and to encourage Pakistanis living here to join the party.

Promoted
Listen to the latest songs, only on JioSaavn.com
Besides, it also aims to assist the elected and appointed officials of the US "to understand issues that are vital to Pakistan with the aim to help USA Foreign Policy Experts to formulate US-Pakistan policies" to help strengthen the relationship between the two countries.

Mr Khan further said the mandate given to the party's agent includes promotion of "better understanding between the citizens of the USA and Pakistan through seminars, open public meetings and cultural programmes".