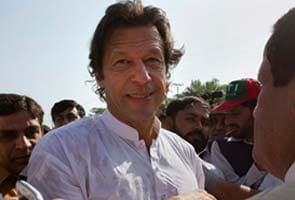 Islamabad: Pakistani politician Imran Khan today urged the government and military leaders to build a strategy to halt US drone attacks in the country's northwest as he was sworn into parliament.

Mr Khan, the head of the Pakistan Tehreek-e-Insaaf (PTI) party which made a major breakthrough at the May 11 general election, is a vocal opponent of the missile attacks targeting Taliban and Al Qaeda militants.

The 60-year-old was unable to take the oath with other lawmakers on June 1 as he was undergoing treatment for serious back injuries suffered in a fall at an election rally shortly before polling day.

But today he delivered a wide-ranging speech in parliament, setting out his policies and intention of holding the new government to account from the opposition benches.

New Prime Minister Nawaz Sharif has criticised drone strikes since coming to power, echoing long-held Pakistani complaints that they violate sovereignty, and used his first speech in office to call for them to end.

Mr Khan said a comprehensive approach was needed, involving the army chief - widely seen as the most powerful man in a country ruled for more than half its life by the military.

"The prime minister, army chief and chief ministers should sit together and form a policy on drone attacks," Mr Khan told parliament.

"We have to make this war our war, and it cannot become our own war unless we stop drone attacks."

According to the British Bureau of Investigative Journalism, since 2004 up to 3,587 people have been killed in Pakistan by drone attacks, and critics argue the civilian deaths they cause encourage people to join militant groups.

But the Washington views them as a vital weapon in the fight against Islamist militancy and the programme scored a notable success - in US eyes - earlier this month by killing the deputy commander of the Pakistani Taliban.

Mr Khan said he was not in favour of shooting down drones, as some in his own party have urged, but called for a more concerted diplomatic effort.

"First of all we should go to the UN Security Council and raise the issue there," he said.

PTI leads the ruling coalition in northwestern Khyber Pakhtunkhwa province, which borders the tribal regions and has borne the brunt of the Islamist militant violence that has wracked Pakistan in recent years.

Interior Minister Chaudhry Nisar told parliament that the government had held detailed discussions with the army chief and would formulate a consensus on drones.

Promoted
Listen to the latest songs, only on JioSaavn.com
"The nation should stand united and send out a message that Pakistan is not a banana republic," Nisar told lawmakers in response to Khan's speech.