Navjot Singh Sidhu, who has braved taunts and insults heaped on him on social media for the visit, brushed them aside, suggesting that he did not have to give anyone any proof and couldn't care less about what people said. 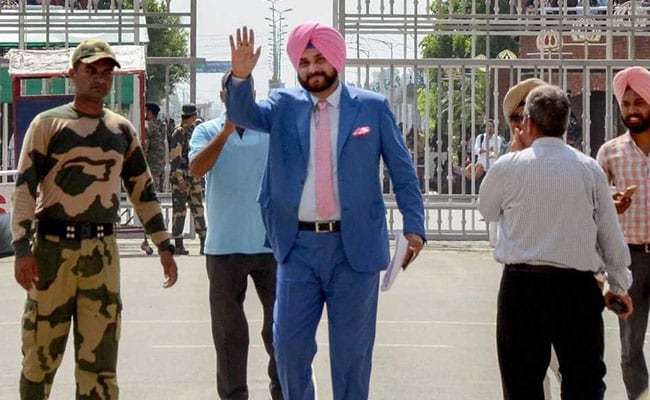 Navjot Sidhu said he has brought "a message of love" to Pakistan as a goodwill ambassador of India.

Navjot Singh Sidhu, the only one of the three Indian cricketers invited by Pakistan Tehreek-e-Insaaf chief Imran Khan to his swearing-in ceremony, reached Lahore on Friday to watch his friend take over as Prime Minister. Minutes after walking across the border at Wagah, Navjot Sidhu, who is also a minister in the Congress's Punjab government, said he had come to Lahore to "take part in the happiness of my friend", Imran Khan.

"I have come here not as a politician but as a friend," Navjot Sidhu, 54, said.

Mr Sidhu, who has braved taunts and insults heaped on him on social media for the visit, brushed them aside, suggesting that he did not have to give anyone any proof and couldn't care less about what people said.

Pakistan Prime Minister-elect Imran Khan had invited his two other contemporaries on the Indian side, Kapil Dev and Sunil Gavaskar also.

But both decided to skip the ceremony, reportedly citing prior engagements.

Mr Sidhu, who had announced his intent to accept the invite even before a formal communication came, stood his ground.

"Hindustan jeevay, Pakistan jeevay (May India live, May Pakistan live)," he chanted, reading a couplet that he had written much before he had stepped on Pakistani soil.

Mr Sidhu said he saw himself as "a goodwill ambassador of India" and had brought "a message of love" to India.

To a question, Mr Sidhu said he had brought a Kashmiri shawl as a gift for "Khan sahib".

Ties between the two countries have been strained in recent years over terror strikes by Pakistan-based groups, especially the attack on an army camp in Kashmir's Uri, after which India carried out surgical strikes on terror launch pads across the Line of Control.

The cricketer-turned-politician, according to Pakistan newspaper Dawn, recalled how former prime minister Atal Bihari Vajpayee had also pushed for improving ties with Pakistan and started the bus service through Wagah.

Quoting Mr Vajpayee, according to news agency PTI, he said, "If there is a fire at a neighbour's house, we will also get the heat."

Mr Vajpayee, who made repeated efforts to resolve differences with Pakistan despite severe setbacks, is known to have argued that a country could not change its neighbours and "you have to get along with them".

Mr Khan, who played first class cricket for two decades and captained the Pakistan cricket team to a world cup victory over England in 1992, had floated his political party in the mid-nineties after a successful career in cricket.

Pakistan Tehreek-e-Insaaf, or PTI, has been in the fringes of Pakistan's politics for most of the 20 years of its existence. In last month's national election, the PTI, however, emerged as the largest party. It did not have a majority but stitched a coalition that scraped through a simple majority in a confidence vote on Friday with 176 seats.