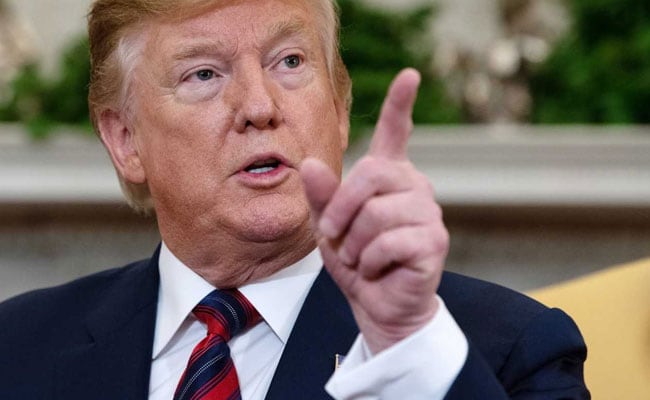 "What is the purpose, what will it get you," tweeted Donald Trump (File Photo)

US President Donald Trump on Sunday told Syria and Russia to stop "bombing the hell" out of Syria's last jihadist stronghold Idlib.

"Hearing word that Russia, Syria and, to a lesser extent, Iran, are bombing the hell out of Idlib Province in Syria, and indiscriminately killing many innocent civilians. The World is watching this butchery. What is the purpose, what will it get you? STOP!" he said on Twitter shortly before he was to depart for a state visit to Britain.

His comments came after Syrian NGOs on Friday decried international inaction in the face of mounting violence in the northwestern region.

As well as killing dozens of civilians, the recent bombardments by Syrian and Russian forces in northwest Syria have pushed 300,000 people towards Turkey's border, the NGOs said at a press conference in Istanbul.

The Syrian Observatory for Human Rights said Friday that almost 950 people had been killed in the latest clashes in Idlib.

A September deal was supposed to avert a full-out regime offensive on the province and adjacent areas held by Syria's former Al-Qaeda affiliate Hayat Tahrir al-Sham.

But the jihadists have refused to leave the area, and the deal is on the verge of collapse as Syrian and Russian forces allied to Syria's President Bashar al-Assad ramp up air strikes and rocket fire.

Iranian fighters and Hezbollah paramilitary forces are also stationed in Syria to back the Assad regime.

The worsening unrest in Idlib comes with tensions soaring between Iran and the United States.

The stand-off has been simmering since the US last year withdrew from the 2015 nuclear treaty Iran reached with major world powers.