The iceberg is large, but not as huge as the iceberg that in 2017 calved from the Larsen C Ice Shelf and recently threatened to run aground on South Georgia Island. A large iceberg about 20 times the size of Manhattan broke off the Brunt Ice Shelf in the Weddell Sea section of Antarctica during the past day, following the buildup of a large crack in the floating ice during the past decade. The iceberg is about 490 square miles and 492 feet thick, according to the British Antarctic Survey, or BAS.

The iceberg is large, but not as huge as the iceberg that in 2017 calved from the Larsen C Ice Shelf and recently threatened to run aground on South Georgia Island.

The BAS maintains a research station, the Halley Research Station, on the ice shelf that will be unaffected by the calving, the organization said. In 2016, the BAS moved the station, which is built on skis, to protect it from spreading cracks that could have left it marooned, floating out to sea aboard an iceberg.

The past decade has seen three major cracks develop through the floating ice shelf, according to a BAS news release.

"This is a dynamic situation. Four years ago we moved Halley Research Station inland to ensure that it would not be carried away when an iceberg eventually formed. That was a wise decision," Simon Garrod, director of operations at the BAS, said in the news release. No one is at the base since it is staffed only during the Antarctic summer research season.

"Our job now is to keep a close eye on the situation and assess any potential impact of the present calving on the remaining ice shelf. We continuously review our contingency plans to ensure the safety of our staff, protect our research station, and maintain the delivery of the science we undertake at Halley," he said. 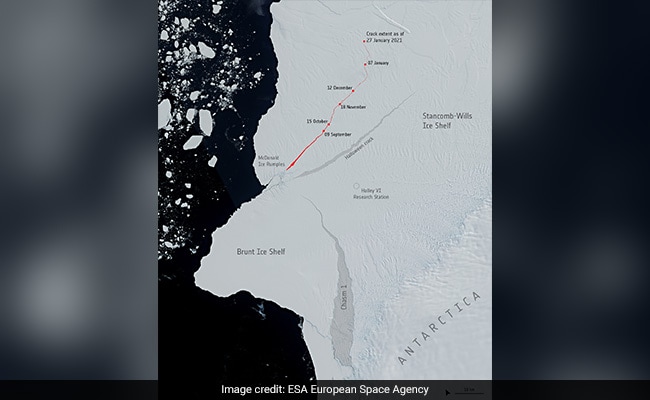 Satellite imagery shows the cracks in the Brunt Ice Shelf as of Feb 12, 2021.

Ice shelves are floating areas of ice that help hold back ice anchored on land. Because they're already displacing water, the calving will not raise sea levels, but icebergs are carefully monitored in case they move into shipping lanes.

Adrian Luckman, a researcher at Swansea University, has closely tracked satellite images of Brunt as the cracks have progressed.

"Although the breaking off of large parts of Antarctic ice shelves is an entirely normal part of how they work, large calving events such as the one detected at the Brunt Ice Shelf on Friday remain quite rare and exciting," he told the BBC.

"Time will tell whether this calving will trigger more pieces to break off in the coming days and weeks. At Swansea University we study the development of ice shelf rifts because, while some lead to large calving events, others do not, and the reasons for this may explain why large ice shelves exist at all," he told BBC News. It's also not clear whether the calving event was driven in part by climate change, since this is a natural part of ice shelf behavior.

Calving events can act to speed up the movement of inland ice into the sea, though it's not clear that's the case with the Brunt Ice Shelf in particular. Such movement would add to sea level rise, and there are growing concerns about the potentially unstoppable melting of the West Antarctic Ice Sheet from warming waters that are weakening ice shelves and penetrating the base of inland glaciers.

According to the European Space Agency, the most recent calving event on the Brunt Ice Shelf before this one occurred in 1971.