"I Would Have Died If Someone Didn't Come": Stranded Iditarod Racer's Ordeal

Both men were participants in the Iditarod Trail Sled Dog Race, the famous 1,000-mile trek running from Anchorage to Nome. 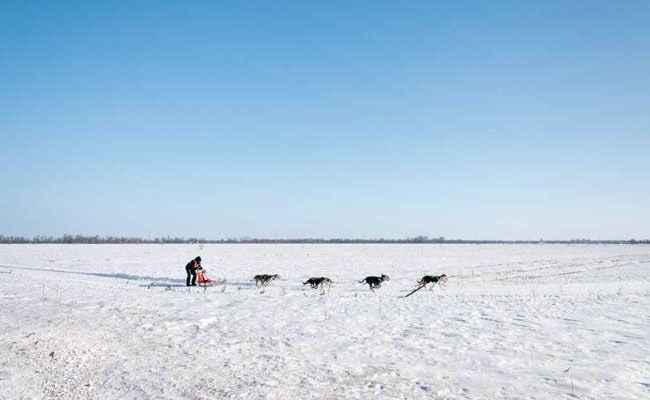 The men were participants in the Iditarod Trail Sled Dog Race. (File photo)

Washington: Professional proximity tidies up any rosy misconceptions about death. Jim Lanier was a pathologist, Scott Janssen a funeral homeowner. When the two were trapped last week in a subzero blizzard in the Alaskan wilderness, they realized, as the as the hours stacked up and the wind screamed, that at a certain point, mother nature was going to win. The clock was ticking.

Both men were participants in the Iditarod Trail Sled Dog Race, the famous 1,000-mile trek running from Anchorage to Nome. In the last 45 miles of this year's race, on an infamous stretch of the route called "the blowhole," Lanier and his team snagged. Chancing across his longtime friend, Janssen opted to wait with Lanier for help to arrive. Both then were pinned by 50-mile-per hour wind gusts that would shut down cities in the Lower 48 states. Snow as fine as desert sand stung their eyes. Frostbite and hypothermia crept up their fingers and toes.

They huddled together in a sleeping bag, waiting for help, swapping gallows humor and chiding one another about their politics (Lanier is a Democrat; Janssen a Trump-supporting Republican).

"The guy is a mortician, so he made a joke about how if they found us frozen to death, he would make sure we had the right sized coffins," Lanier told The Washington Post this week.

The banter was undercut by a desperate concern about the rescue -- and if it would come in time.

At 77, Lanier was the older of the two, a veteran of the race's early years. The Iditarod started in 1973. Lanier, who had arrived Alaska in 1967 to work with the U.S. Public Health Service, heard about the race from friends and went on his first Iditarod in 1979. This year marked Lanier's 20th race. "The Iditarod this year went pretty well for me until it didn't."

Overall, 2018 was tough on many mushers. Flu worked through the race, slowing teams. The two-week race period was also dogged constantly by snow and wind. "I think I saw the sun for about 20 minutes the whole time," Lanier told The Post.

Still, the Iditarod veteran was feeling good going into the final miles. Every race, as his team of white dogs plowed through the route, Lanier followed a distinct ritual, composing in his mind, mile after mile, original song lyrics for a piece about the race. At the Iditarod's closing banquet, Lanier would set his words atop the borrowed melody of a familiar tune and perform for the mushers. The song he worked up this year was called "The Dog Musher's Lament."

"Its whole idea was to honor the mushers that don't make it," he said. "Which turned out to be prophetic."

Around 45-miles before the finish line, between the White Mountain and Safety checkpoints on the trail, the route stretches out into a treeless moonscape skirting the frozen edge of the Baring Sea. The area is called the blowhole due to the ferocious winds kicking through the mountain passes and funneling on to the plain.

The conditions there can quickly spin from calm to treacherous. "It doesn't even need to be snowing," Lanier explained. "The wind can blow, creating a ground blizzard. And if the trail gets drifted in, it disappears completely."

When the musher and his team of 13 dogs entered the blowhole at night, the weather was calm. The wind then began hammering. Lanier had not fished up his goggles from his sled, and the wind and snow began sealing his eyelids. He could not see beyond his lead dog. His headlamp failed to penetrate the swirling darkness, and Lanier did not realize his dogs had swung off course, drifting away from the trail on the beach and out onto the ice.

Lanier finally stopped his dogs. He decided to wait until another musher passed, calling for help to get reoriented back to the route. But it was a risky plan due to the worsening weather. After years of racing in the subzero weather, Lanier's fingers and toes suffered easily in the cold -- he constantly used hand warmers. Yet out on the ice, his warmer ran out of heat.

"You don't just stop and have a picnic out there in the blowhole."

A team did eventually run past Lanier, but the musher failed to notice the stranded sled. The wind swallowed up Lanier's calls for help. "My best shot at going out of there was gone."

At the same time, Janssen's own team of 11 dogs was battling through the blowhole at about 10 miles per hour. "The dogs were firing on all cylinders," he told The Post. "They were rocking."

Janssen -- who calls himself "The Mushin' Mortician" -- was undertaking his 7th Iditarod this year. Well-aware of the blowholes' challenges, the 57-year-old kept his eyes as usual tuned to his dogs. The flock's reactions were reliable instruments for picking up on what the musher couldn't see himself, whether the first sign of dawn or a coming storm or a wolf. Inside the blowhole, Janssen noticed all the ears on his dogs perk up in unison and turn to the left, to the ice.

The musher then spotted the reflectors on a dogsled off the route. When he called out, Lanier replied back, asking for help.

The two mushers worked to untangle Lanier's dog lines. But Janssen was not dressed for hefting around in the cold. Earlier in the race, he'd shipped his heaviest parka home, anticipating a quick final run to the finish line. As he worked to free Lanier's sled from a piece of driftwood, the harsh wind caught his gloves, whipping them away. All the effort to get the sled ready to run had caked Janssen in sweat, which quickly froze on his body. When the two men finally got Lanier's sled ready, the animals were too tired to huff on.

The only last option was to wait for help. Janssen opted to stay with his friend, scraping his own chances at finishing the race. The men dug little holes for the dogs to burrow into. Janssen called his wife on a satellite phone, telling her to alert race authorities they needed help. Then the two friends burrowed down into the sleeping bag to wait.

Eventually, two riders on fat bikes - specially designed bikes that also participate in the Iditarod - came across Janssen and Lanier. The riders helped them activate an SOS device that alerted authorities to their GPS location. But the riders then needed to leave for shelter. Janssen and Lanier were back alone, waiting. On a final call to his wife and family, Janssen confessed he did not know if they would make it out alive.

"He told his wife on the phone we were in a life-threatening situation," Lanier said. "I never thought that exactly because I just knew someone would be coming to get us."

After what Lanier estimates was about five hours in the storm, the rescuers arrived right as dawn was breaking. Both Lanier and Janssen - and all their dogs - eventually returned unharmed.

On Sunday, the race wrapped with an awards banquet in Nome. Janssen was awarded a sportsmanship award for his decision to break off his own race and stay with Lanier. Lanier ended up singing his ode he had written on the trek.

"It turned out to be a song about me and my team."


(Except for the headline, this story has not been edited by NDTV staff and is published from a syndicated feed.)
Comments
iditarod raceralsaka